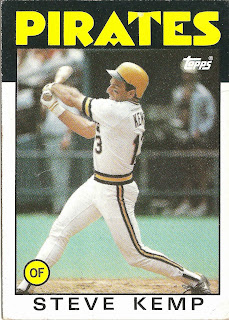 Card thoughts: Kemp generally looks a lot shaggier on his cards (see here, here, and here). This is Kemp’s only base card as a Pirate.

The player: Kemp had a charmed baseball life his first few years in the majors. A #1 vdraft pick out USC, he spent just one year in the minors before joining a very talented young Tiger team in 1977, which also included rookies #270 Jack Morris, Lance Parrish, #130 Alan Trammell, and #20 Lou Whitaker, all who made their debuts that season. Despite driving 88 runs as a rookie, Kemp did not rank in the Rookie of the Year voting, which was dominated by #30 Eddie Murray and Mitchell Page.

In his sophomore season, Kemp’s power numbers slumped a bit as he learned to be more selective. This would set him up for two monster seasons in 1979 and 1980.  In both seasons, Kemp drove in over 100 runs but the ’79 season really stood out, as he reached career highs in home runs (26), RBIs (105), batting average (.318), slugging (.543) and OPS (.941). Kemp made his only all-star squad that year, where he went hitless in a pinch hitting appearance for Bob Stanley. The one drawback in his game was fielding, as he was tentative in left field (although when he got to the ball, he didn’t generally flub it).

Unfortunately for the Tigers, all that success increased Kemp’s value. After turning down a $750,000 contract, the Tigers felt they were going to lose him to free agency after the 1981 season.  So they traded him to the White Sox, straight up, for another former all-star outfielder, #160 Chet Lemon. Kemp had mixed feelings about the trade, as he acknowledged he’d miss Detroit, despite being booed there often.

This trade would be beneficial to both clubs. Kemp would have one his finest years for the White Sox, scoring a career high 91 runs, and driving 98, despite hitting just 19 home runs in less hitter happy Comiskey Park.  But, like the Tigers, the White Sox couldn’t afford to pay the slugger $1 million a year. Instead, he left for the Yankees. At 28 years old, and one of the highest paid players in the league, the world was Kemp’s oyster.

Except, it wasn’t.  Kemp was one of the first free agents to get clubs to engage in a bidding war (the Orioles were miffed that Kemp’s agent was playing both sides against the middle. Ah, innocent times!), and the expectations for him in New York were sky high. But Kemp had been hit in the elbow at the end of the 1982 season, and he began overcompensating for the injury, which led to him pulling his groin after just one at bat in the first game of the 1983 season. He later badly bruised his collarbone after colliding with the outfield wall.  Kemp got into just 109 games and his OPS dropped .718.  His defense, always suspect, was even worse with the injuries, and he was booed lustily at home.

But it got even worse. He was struck in batting practice by a line drive at the end of the 1983 season, which broke his eye socket, and permanently damaged his optic nerve, leading to a blind spot and lack of depth perception. Kemp did hit for a higher average in 1984 (.291), but the power was gone, and with it, his position of one of the best hitters in the game.

Desperate to unload the damaged Kemp, the Yankees included a boatload of cash to the Pirates, as an encouragement to take him off their hands. With the Pirates, Kemp failed to provide the power they needed (13 doubles, 2 home runs) in 92 games, and he was released early in 1986 season, having never regained his power stroke (and once again, being booed constantly).

Kemp attempted comebacks with the Padres and the Rangers and, although he hit well at AAA, he only got 36 more major league at bats in 1988 before he retired. 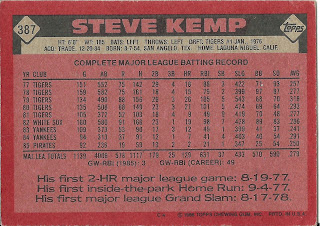