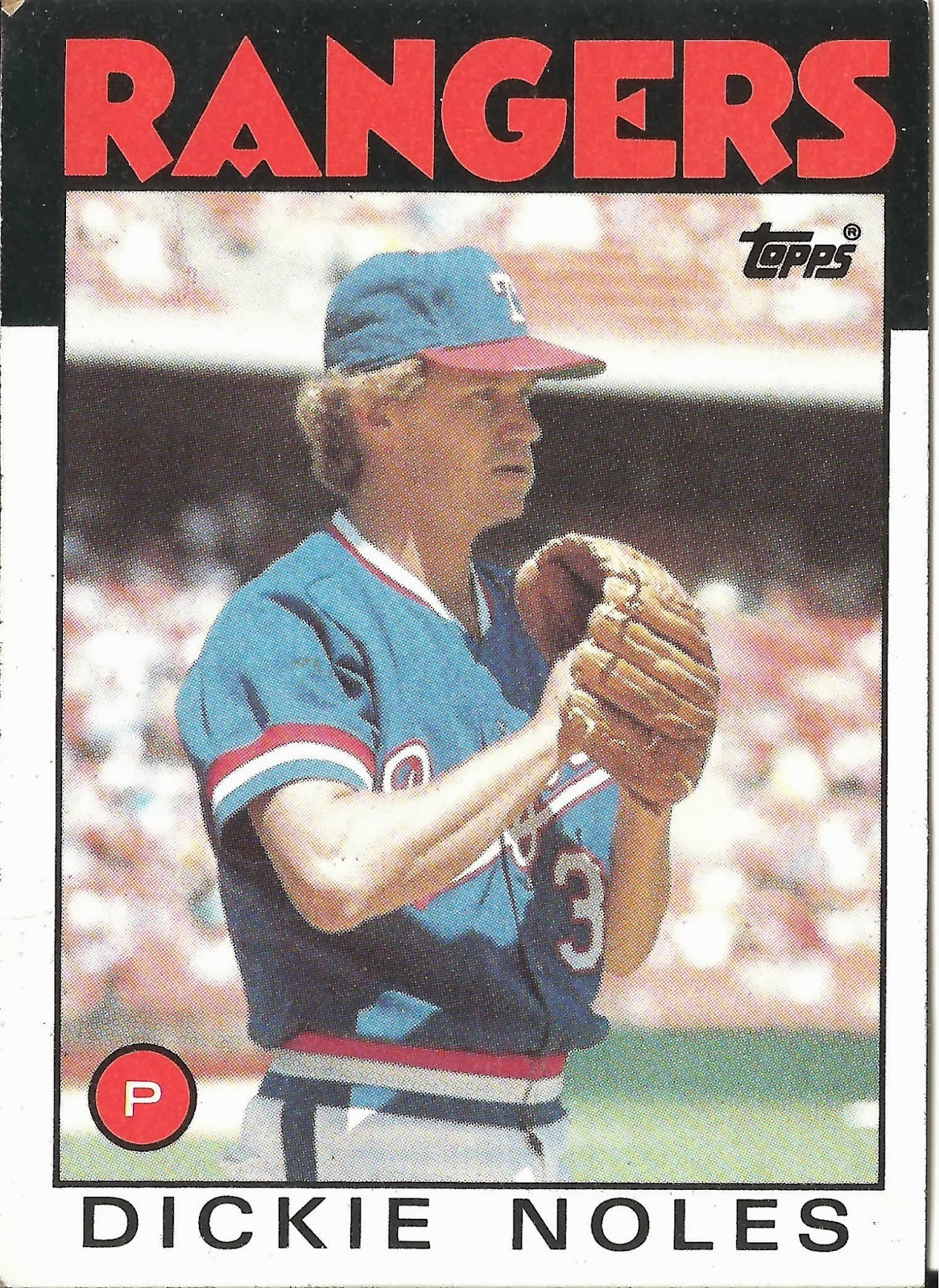 Card thoughts: That is one unfortunate nickname. It is very rarely used today. Also, almost every picture of Noles in the early days shows him with that enormous wad of chaw in his cheek.

The player: Legendary hothead Dickie Noles was known for a fierce fastball (topping 90 with regularity) and fierce demeanor on the mound (he was a legendary headhunter). He was the Carlos Zambrano equivalent for the Cubs in the early 80s. But his early promise never really translated into success, as his problems with alcohol and anger doomed him to a life as a marginal pitcher.

Noles reputation as a no-holds-barred pitcher came early. As a minor leaguer for the Phillies in the late 70s, he led the league in hit batters in the Western Carolina League, the Carolina League, and the Eastern League. Despite the wildness, no one could deny that Noles had a great arm, and he when he was called up in July of 1979, he was effective as a starter. In 14 starts, he kept the wildness in check (38 walks, 2 wild pitches, and 2 hit batters in 90 innings). However, he didn’t have the ability to go deep into games, so in 1980, he was shifted to the bullpen. Although Noles’ walks per nine innings went up, he did save 6 games. In perhaps his most memorable appearance in the majors, he relieved struggling starter Larry Christensen in Game 1 of the World Series that year in the first inning, and proceeded to shut down the Royals for the next four innings. What he is most remembered for, however, is throwing a little chin music to #300 George Brett (at 1:06:08 in this video). This pitch is credited with shutting Brett down for the rest of the series.

When Noles manager in that series, Dallas Green, became the GM of the Cubs, he began a wholesale pilfering of the Phillies young players, and Noles came to the team, along with #266 Keith Moreland, for Mike Krukow in 1982. Noles was again tries as a starter for the Cubs, and he went 10-13 that season, but with a high 4.42 ERA. His pitching wasn’t helped by his alcoholism, which led to him getting into several drunken brawls. The most infamous of these came at the beginning of the 1983 season, when he pummeled a cop trying to break up a fight at a bar where Noles was drinking. He was sentenced to 16 days in a Civil War-era Cincinnati prison, and later entered rehab. The season was a wash as well, as Noles suffered through a 5-10 season as both his strikeouts, and walks, went down.  Part of the problem was that in the fight he injured his knee, robbing him of his great fastball.

With a 2-2 record and a 5.15 ERA, Noles was the proverbial last man out of the bullpen in early 1984, before the Cubs finally tired of waiting for him to regain his fastball. He was shipped to the Rangers for two forgotten minor leaguers in July, where he failed to right the ship.

Tried again as a starter in 1985, his 5.54 ERA in the rotation hastened him into the bullpen by the end of the season, where he was marginally more effective. While Noles still had the great arm, some of his mound fierceness had left him once he quit drinking. While not as wild, he wasn’t striking out many either, and these traits made it hard to stick with any one club for very long. With the Indians in 1986, he was in the bullpen again, but he struck out barely more than he walked, so he was on the move again, this time back to the Cubs. Here, he would have his last effective season, going 4-2 with a 3.50 ERA. In a strange twist, Noles was sent to the Tigers in late September for a player to be named later, who turned out to be Noles himself, when no player was agreed upon (his card that year reads "Now with Tigers"). Which really didn’t make much of a difference, as he was granted free agency and later signed with the Orioles.

Noles would pitch just three more games after the 1987 season. He later became a born-again Christian, and spends much of his time giving anti-alcohol abuse lectures, using his own travails as an example. Noles also serves in the Phillies front office as the employee assistance professional, a kind of counselor to players battling stress, addiction, or mental illness. 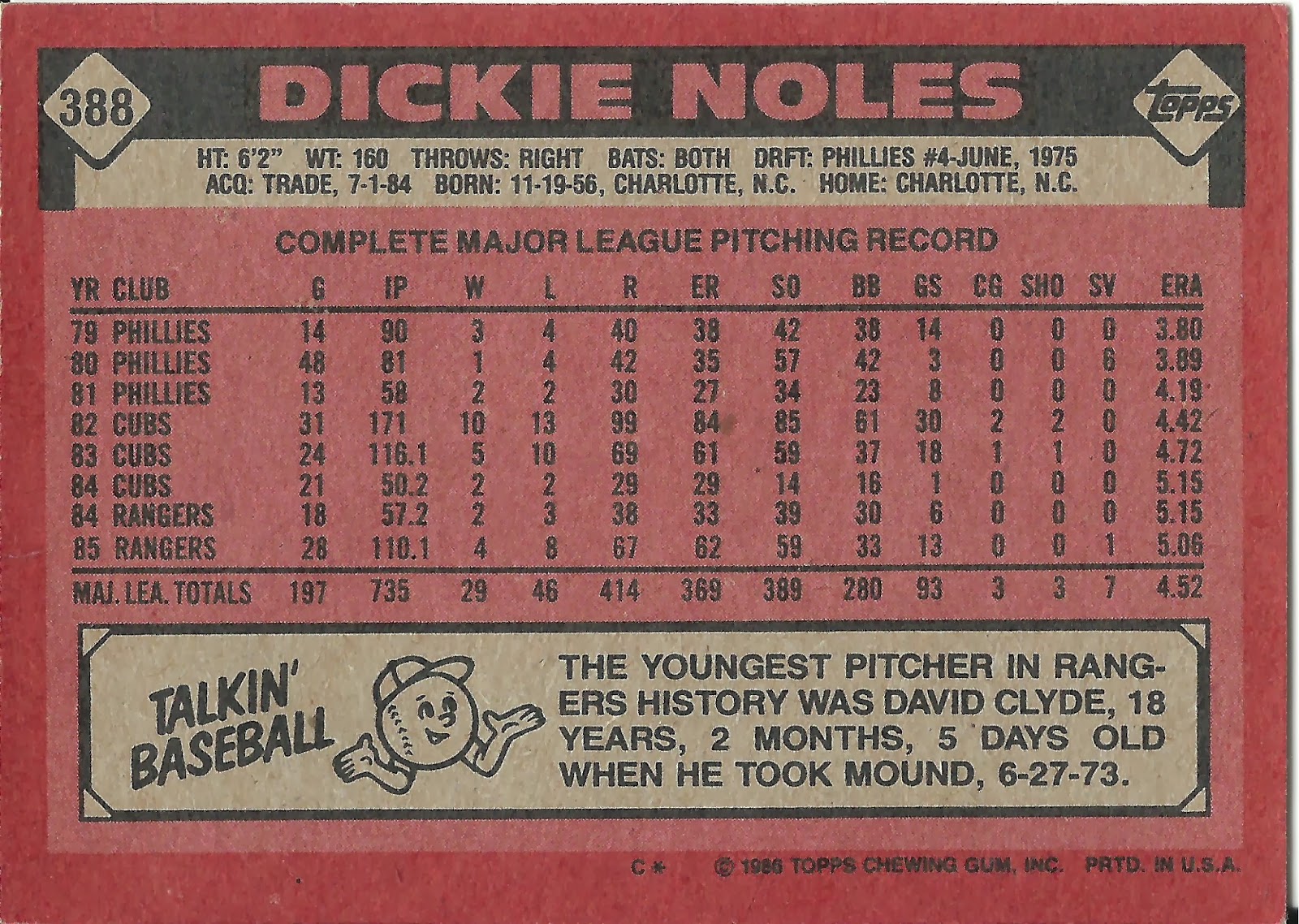 Rear guard: Much has been written about David Clyde, mostly as a cautionary tale not to rush young pitchers into the majors. Basically, the Rangers needed an attendance boost, and the owner was the kind of idiot who would permanently damage a young player's arm to get it. Clyde had graduated from high school just 20 days before his debut, where he gave up just 2 runs in 5 innings, despite walking 7 (he also struck out 8). It was planned that he'd just make a few starts before being sent back to the minors, but he was kept in the rotation the rest of the season, which eventually ruined his arm. Here's his card from that season, one of only three issued by Topps in his all too brief career.