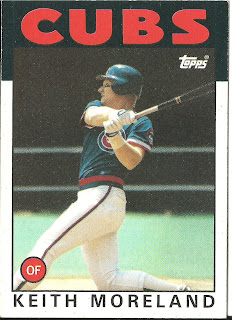 Card thoughts: A lot of the in game Cub card shots seem to be taken at this park. Let’s see: Astroturf, black background. I’m guessing Riverfront Stadium in Cincinnati.

The player: Moreland was part of the great migration of former Phillies to the Cubs in the early 80s, a migration which included key components of the 1984 division winners including Warren Brusstar, Gary Mathews, #188 Bob Dernier, Larry Bowa, #19 Rich Hebner, #98 Dick Ruthven, and, of course, Ryne Sandberg. Other than Sandberg, Moreland was one of the few players to have consistent success with the Cubs after that season.

Nicknamed “Zonk,” Moreland was a two-way star at the University of Texas, playing football for legendary coach Darnell Royal, and on a baseball team that won the College World Series. Moreland was drafted by the Phillies and came up in their system as a catcher. He was the primary backup to #62 Bob Boone in the 1980 and 1981 seasons. When Greg Luzinski came down with a stomach virus in the 1980 World Series, Moreland stepped in for three games as the designated hitter and hit .333. The Phillies wanted to groom #95 Ozzie Virgil for the catching job because they felt Moreland’s defense wasn’t up to snuff (although his bat was). In one of the first of many raids on his former team, new Cubs GM Dallas Green acquired Moreland and pitcher Dickie Noles for Mike Krukow.

The Cubs shifted Moreland to the outfield, and he spent 1982 at all three positions, while contributing 15 home runs and 68 RBIs. Although he was never a great fielder, his bat kept him in the lineup. Moreland finally became a regular (right field) the next year and responded with his first +.300 campaign and a career high .838 OPS. He was a fiery team leader, but I won’t resort to the old cliché that it was because he had red hair. In one incident, Moreland, a former college football star, tackled Expos pitcher #52 Chris Welsh after the latter had plunked him in the neck with a fastball.

1984 was not as good for Moreland as Mel Hall took his spot in right to start the year. But Hall was later traded for Sutcliffe, and Moreland went back to right, although he also filled in at first and third. Still, his power numbers and on-base percentage dropped drastically. But he drove in 80 runs and hit .333 in the playoffs. You can see some of his highlights of that season at the 23:00 mark of this video.

When this card was issued, Moreland was in the midst of his best season. Although he only hit 14 home runs, he was mister clutch, driving in 106 (4th in the league) and hitting .307. After another solid year in ’86, the Cubs made the idiotic decision to move Moreland permanently to third base. This was because they signed Andre Dawson, a premier right fielder, in the off season. But anyone who watched the 1987 season on WGN remembers the numerous balls Moreland booted or failed to get to. He led the league in errors, and posted a poor .935 fielding percentage. But it didn’t affect Moreland bat, as he hit a career high 27 home runs and drove in 88 that homer happy year.

No longer really having a place for Moreland on the club, awful #231 Jim Frey did what he knew best: traded a productive player for a washed up reliever (Goose Gossage). Unfortunately for the Padres, Jack Murphy Stadium sucked all the life out of Moreland’s bat, and he hit a measly 5 home runs (but still drove in 64). That was enough to get him sent to the Tigers for Walt Terrell after the end of the season. With the Tigers, Moreland was the team’s primary designated hitter, and he hit .299 in that role. But the Tigers were not in contention that season, so he was shipped to the Orioles down the stretch. A .215 average off the bench led to his exit from pro baseball.

Moreland returned to Texas and spent time as a mentor and color man for the University of Texas baseball and football teams (he had played on both). After filling in for years for Ron Santo or Bob Brenly when they were away, Moreland was named full time radio color man for the Cubs in 2011, a role he continues to fill. 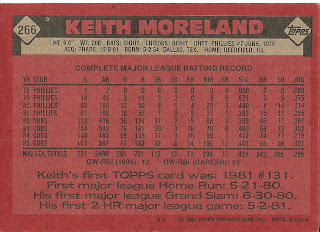