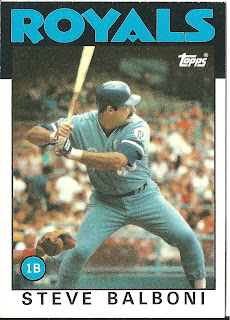 Card thoughts:  Classic shot of Balboni at Tiger Stadium, gearing up to either hit a long bomb, or spectacularly whiff.

The player: Steve Balboni was one of many, many Yankee farmhands from the early 80s that went on to a productive career for another major league team. A fearsome slugger who was nicknamed “Bye Bye,” he was also an all or nothing type of hitter like Rob Deer or Dave Kingman. Despite hitting over 30 home runs for three straight minor league seasons (1980-1982), Balboni couldn’t crack the Yankee lineup because of his propensity to strike out. After playing a handful of games for the big club over three seasons, he was sent to the Royals in 1983 for a reliever and a minor leaguer. Balboni immediately made an impact in Kansas City, mashing 28 home runs in 1984. Unfortunately, he also led the league in errors at first, and only hit .244. The year shown on this card Balboni upped his home runs to 36 (a Royals record), but struck out at an alarming rate, leading the league with 166, 23 more than the 2nd place hitter on the leader board, Jesse Barfield. In the World Series that year, Balboni hit over .300 and drove in 3 runs.
Until 1988, Balboni would hit over 20 home runs every year for the Royals and Mariners, but his RBI totals kept declining, and his average dipped into the low .200s. After a brief stint with the Mariners, Balboni was traded to his original team, where he played the last two seasons as a semi-regular designated hitter. After returning to minors for a couple years, where he once again mashed over 30 home runs, Balboni reappeared for 2 games with the Rangers at the end of 1993 to finish his career. Although he hit 181 home runs, his career average was only .229.
Here’s a weird Web series based on Topps baseball cards somehow (which is actually surprisingly amusing) that uses Steve Balboni as the butt of a running joke in Episode 7: “Balboner”. In real life, Balboni has been a hitting coach for the Royals and Cardinals organizations. He's especially proud of the work he did with current catcher Yadier Molina who was 20 at the time. 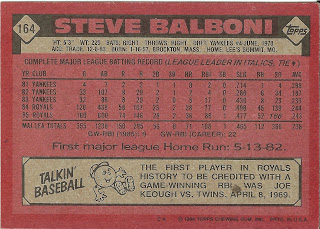 Rear guard: Balboni's first home run came off A's starter Tom Underwood and drove in #70 Dave Winfield. He added a double in the 6th inning and went 3 for 4 in the game.

Oh the Game Winning RBI. This was a statistic used from 1980-1988 and credited the player who drove in the run that put the team ahead for good with the game winning RBI. Even if more runs were later needed to beat the other team. The wishy-washy nature of this statistic led to its demise. But Topps was still pumping the stat in 1986, even retroactively discovering previous game winning RBIs in the murky past. Joe Keough's single with the bases loaded in the bottom of the 12th inning drove in Joe Foy with the winning run: An indisputable game winning RBI. Joe Keough played for 6 seasons, mostly as a utility player, although he did start for the Royals in right field in 1971. He drove in 81 runs in his career, and is the uncle of "ace pitcher turned town drunk" Matt Keough.
This date in baseball history:  Oscar Charleston, a Negro League star who is considered one of the best all time ball players, is inducted into the Hall of Fame in 1976. He had a lifetime .354 batting average.
Posted by Jets Break Jaws at 4:15 PM

If you've ever read teh Graig Nettles biography, "Balls", he mentions that one of the reasons they called him bye-bye was because he kept getting called up and sent back down to the minors. The early 80's yanks were full of aging, first base types and an up and comer Don Mattingly. The biography is hilarious, both praising and ripping Steinbrenner. Steinbrenner got rid of Nettles after the book came out...