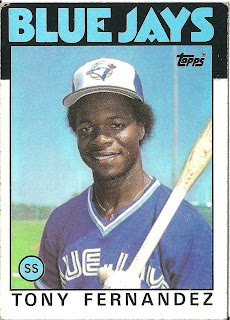 Card thoughts: Blue everywhere! There will be more of these posed spring training shots in the set.

The player: A thin man (his playing weight was only 165 lbs on a + 6 foot frame), Fernandez nevertheless was a consistent, high average hitter. But he was most adept at defense. Fernandez was the Ozzie Smith equivalent the American League. He could make the acrobatic play with ease, including leaping into the air while simultaneously making an underhanded throw to first base.

He was well suited for the turf era. Fernandez had a line drive stroke, and was a prolific triples and doubles hitter. After backing up Alfredo Griffin in 1984, Fernandez won the starting job in 1985, only missing one game. His 10 triples put him in the top ten, and he led the league in assists by a shortstop, although he also committed 30 errors. In the ALCS Fernandez hit .333.

Fernandez was traded in a blockbuster deal to the Padres in 1990 with Fred McGriff for future hall-of-famer Roberto Alomar and Joe Carter, both of whom propelled the Blue Jays to back to back World Series victories. With the Padres, Fernandez became more of a singles hitter, but he still hit in the high .270s.

A trade in 1993 brought him to New York, where he hit an abysmal .225 for the Mets, before being sent back to the Jays early in the season (the 2nd of 4 different times he played for Toronto). The Blue Jays had been rotating veterans Dick Schofield and Alfredo Griffin (again) in the shortstop position to little avail. Fernandez immediately solidified the position, hitting .306 in 94 games and playing typically stellar defense. In the Blue Jays World Series victory over the Phillies, he hit .333 and drove in 9 runs.

The Reds picked him up in 1994, but used him at third as another hall-of-famer, Barry Larkin, had short locked down. Fernandez excelled at his new position, hitting .279 and leading the NL with a .991 fielding percentage, incredible for a third baseman.

The next season was his only one with the Yankees and his last as a shortstop, but he memorably hit for the cycle against the A’s. But Fernandez missed the entire following season (when the Yankees won the World Series) with a broken elbow. Then it was on to the Indians, where he hit a career high 11 home runs during the season. In the World Series that year, his go-ahead 2 run single in Game 7 was negated by a costly error in the 11th inning that led to a Series loss.

Back for 2 more years with the Blue Jays, Fernandez set career highs in batting average (.328) and RBIs (75) in 1999, and made his last all star team. After a year in Japan, he spent his final major league year as a utility player for the Brewers and, once again, the Blue Jays. 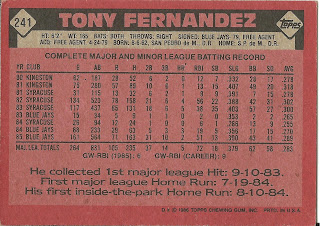 Rear guard: Fernandez' first hit was a double off A's starter Tim Conroy. He later scored on a single by #74 Rance Mulliniks.

This date in baseball history: In 1983, both Donnell Nixon and Vince Coleman break Rickey Henderson's pro ball record of 131 stolen bases while in the minors.
Posted by Jets Break Jaws at 7:57 PM