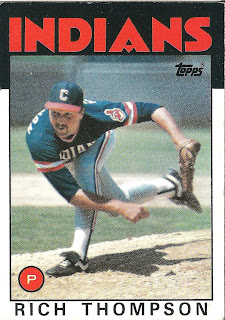 Card thoughts: I love this picture. Thompson’s follow through looks like he’s trying to mimic the Indians “C” cap logo.

The player: The Indians had a lot of rookies on their team in 1985. Unfortunately many, like #208 Ramon Romero, had terrible rookie seasons and were barely heard from again. Thompson falls into that category. The state of pitching in the Indians' minor leagues was terrible in the mid-80s, so guys like Rich Thompson were promoted. He had good control and struck out a lot of guys as a closer in the minors. Unfortunately, in 1985 he walked 48 with only 30 strikeouts in 80 innings. This led to 3-8 record and 6.30 ERA in 57 relief appearances.

Thompson then disappeared into the minors from 1986-1988, first with Milwaukee, then with three different organizations in 1987. Thompson was converted into a starter at Omaha (Royals) in 1988 and had a good 2.90 ERA in that role. With Indianapolis Indians (Expos) the next year he was even better, leading the league in ERA with a mark of 2.06. This earned him a ticket back to the bigs with the Expos, where in 33 innings he continued his strong pitching with a 2.18 ERA. Despite this, he would pitch only one more major league game finishing off a 5-0 Expos loss to the Mets in 1990. 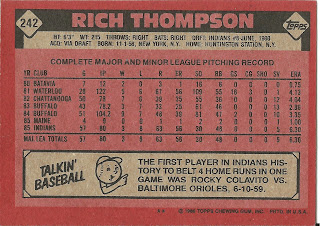 Rear guard: Colavito was one of the most feared sluggers in the late 50s/early 60s. In 1959, he led the league with 42 homers even though he only batted .257. Colavito ended up with 374 homers in his career. Those 4 homers against the Orioles produced 6 RBIs. The Indians would need all of them in a slugfest which they barely won 11-8. Here's his card from that year.

This date in baseball history: In the primitive era of baseball (1886), a dog runs on to the field and starts tearing at the Reds' centerfielder's pant leg. This causes him to miss Chicken Wolf's (real name!) high fly, leading to a game winning, inside-the-park home run for the Louisville Colonels.
Posted by Jets Break Jaws at 9:30 PM