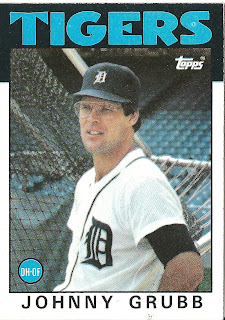 Card thoughts: Johnny Grubb and #101 Dave Bergman. Always got these guys mixed up. Although Grubb is obviously the handsomer of the two. Some have compared his square-jawed visage to Clark Kent.

The player: Grubb was one of a talented crop of young hitters that came up in the Padres system in the early 70s. In his 1973 rookie season, Grubb came in sixth in Rookie of the Year voting by batting .311. The next year, he made the all star team but flew out in his only at bat. Grubb remained the Padres regular left fielder until 1976, but remained mostly a singles hitter. He did reach the top ten in doubles with 36 in 1975.

In a trade that was seen as bad at the time, the Indians traded George Hendrick to get him in 1977. Grubb promptly blew out a knee, and got into only 36 games that year, hitting .301. Grubb finally learned to slug for power the next two years, hitting 15 and 10 home runs, respectively. He became a better left fielder as well, leading the AL in assists in 1978.

By 1979, Grubb was on the Rangers, a team he would fill the role as fourth outfielder/ designated hitter and platooning right fielder. Highlights of his Texas days include a 21 game hitting streak in 1979.

By the time he was traded to the Tigers in 1984, Grubb was generally used as a lefty pinch hitter off the bench. He pinch hit 3 times in the ’84 World Series, but only appeared twice (two other times, he was announced, but didn’t bat). He got 1 hit in 3 at bats.

After his retirement, Grubb coached for his former high school for a decade. 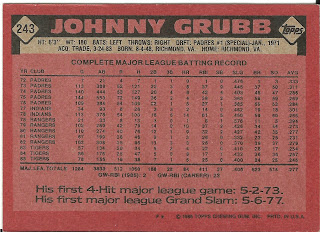 Rear guard: Grubb's grand slam was in a losing cause against White Sox starter Francisco Barrios. It drove in Duane Kuiper (who had reached on a fielder's choice); Buddy Bell (hit by pitch); and Jim Norris (walked).


This date in baseball history: Gaylord Perry is caught for the first time doctoring the ball, and is ejected in 1982. Perry, who had pitched 20 years at that point, had always been suspected of cheating.
Posted by Jets Break Jaws at 7:45 PM