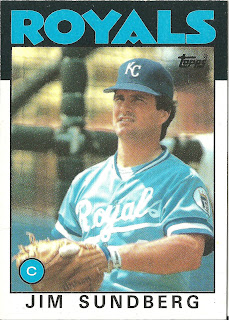 The player: The 70s were a glorious time for catchers. Whereas you would only find the occasional catcher in the 50s and 60s who would catch more than 120 games, the 70s saw such notables as Johnny Bench, Thurman Munson, Carlton Fisk, #62 Bob Boone, and #237 Ted Simmons all catch nearly 140 games some years, with great hitting and receiving skills to boot. Sundberg certainly belongs in this category. Although more similar in hitting prowess to Bob Boone than Johnny Bench, he was in a league of his own when it came to defense.

Sundberg was a 1st round draft choice by the Rangers in 1973 and, as the Rangers were wont to do in the early 70s (see David Clyde), he was rushed to the majors in 1974 with only a year of A-ball under his belt. Despite this, Sundberg acquitted himself well as a rookie, finishing fourth in Rookie of the Year voting and making the all star team. He wasn’t the hitter he would yet become, hitting only .247 with a .678 OPS, but his defense was already remarkable.

Sundberg was the first catcher since World War II to have more than 100 assists in 1975, but the rest of the season was a mess, as he hit a meager .199 with a .256 slugging percentage. After a similar weak 1976 offensive campaign (when he won the first of 6 straight Gold Gloves), Sundberg looked be the proverbial good field no hit catcher.

After 10 years with the Rangers, Sundberg was traded to the Brewers in late 1983 after hitting only .201 the previous season. He had a bit of a late career renaissance in 1984, making the all star squad as a reserve. But the Brewers signed another 70s catching relic, Ted Simmons, and he traded as part of a four-team deal to the Royals after the season. It’s hard to tell who went where in these complex affairs, but Danny Darwin, Tim Leary, Don Slaught and a minor leaguer were distributed among the Rangers, Brewers, Mets, and Royals.

Sundberg steadied the Royals young pitching talent, enough so that they had a the second lowerst team ERA in 1985. Sundberg scored a dramatic winning run in Game 6, avoiding Darell Porter’s swipe tag at home in the 9th inning. After the 1986 season, where he hit a career high 12 homers (but with a low .212 average), he signed as a free agent with the Cubs. I remember Sundberg in this time as seeming very, very old. He was brought in because Jody Davis’ knees were blowing out due to the lack of trust the Cubs had in reserve Steve Lake. Sundberg fulfilled his role as a steady backup for the 1987, and beginning of the 1988 season.

After a season and a half with his original team, the Texas Rangers, Sundberg retired. Upon retirement, he had caught the second most games in history (behind Bob Boone), and had a .993 fielding percentage. He is now VP of Public Relations for the Rangers, where I am sure he is very sunny. 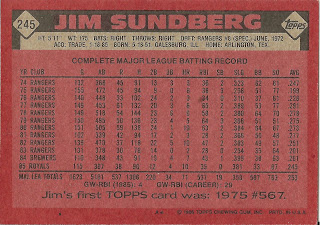 Rear guard: Here's Sundberg's first card. I'm surprised he didn't get a rookie cup, but it went to Barry Foote, a career .230 hitter who had his best offensive season as a rookie.

This date in baseball history: Ty Cobb's first major league at bat was on this day in 1905. He doubled off Jack Chesbro.
Posted by Jets Break Jaws at 7:09 PM