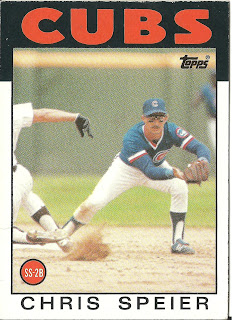 Card thoughts:  Topps this year saved some of their better action shots for plays around second base. By the looks of things, Speier is taking a throw from either first or second on a force play. The game is at the former home of the Padres, Jack Murphy Stadium on May 12, 1985. I believe that is a very blurry #125 Davey Lopes behind Speier

The player:  A player very similar to Larry Bowa, I always think of Speier as a Giant, and I barely remember him as a Cub. Speier was a pushy prospect as a young man with the Giants. Told he needed to report to camp in 1970 with the rest of the minor leaguers, he instead arrived 10 days early. In addition, at the end of that season when he wasn’t called up, he asked if he could at least work out with the team for the last month of the season. At the end of this month long apprenticeship he asked the Giants to bring him to the big league camp as a non-roster invitee with a promise that he would make the club.

Speier made good on his promise, earning a Topps 1972 All-Star Rookie card by driving in 46 runs as the Giants starting shortstop. He then went on a four year run as one of the top shortstops in the National League, making the all star team for three of those years (as a starter in 1973). At a time when hitting by a shortstop was considered a bonus, Speier showed good power and clutch hitting ability, driving in 71,71,53, and 69 runs in those four years and hitting over 10 home runs three times. He was above average on defense as well, showing great range at short.

Speier was not that consistent in the following seasons. In 1976, he hit only .226, and after a poor start in 1977 when he hit only .176, he became extremely disgruntled, perhaps by the Giants not offering him a good enough contract. He was sent to the Expos for another disgruntled shortstop, Tim Foli. He alternated good years with bad in Montreal. Speier had three years with the Expos where he resembled his good Giant years (in 1978, played in 150 games and hit .251; in 1980 hit .265, his highest average in five years; and in 1982 when he once again became a clutch hitter, driving in 60 while hitting .257).

Speier remained the Expos starting shortstop until 1984, when he lost the job to Brian Little. Thrust into a utility role, the Expos decided they wanted a younger player to fill that role, and they traded Speier, who had been asking for a trade since the previous September because of diminished playing time, to the Cardinals for Mike Ramsey. This was probably a bad place for him to land, as Tom Herr and Ozzie Smith were certainly better that the Expos had at that position. After just 38 games where he hit only .176, Speier was traded again to the Twins, who tried to void the trade after he reported to the club with a bruised heel.

Speier signed with the Cubs the following year, which is curious as the team already had veteran Larry Bowa (a similar player to Speier) to provide a safety net for young phenom Shawon Dunston. He managed to appear in over 100 games, as he was needed to fill in for third baseman Ron Cey and second baseman Ryne Sandberg, who were injured much of the season. In 1986, Speier hit a career high .284, this time spending most of his time backing up third.

Speier spent his last three years with his original team, the Giants. He finished his career in 1989, after 19 years with a .246 average and over 1,700 hits.

A hardcore Catholic, Speier started an unaccredited (by both the church and the state) “Orthodox” Catholic school in Arizona after retirement. But he was soon back in the baseball life, and besides some minor league coaching and managing assignments, coached with the A’s, Diamondbacks, Cubs, and Brewers. While coaching with the Cubs, Speier was arrested for drunk driving in Arizona. He is currently the bench coach for the Reds.

Chris’s son Justin pitched for 12 seasons in the majors. 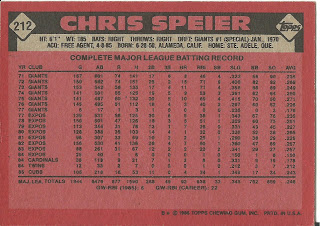 Rear guard: Again with the small font. I think they saved enough room for a stat highlight on the back. Speier certainly had enough of them.

This date in baseball history: In 1929, numbers were worn on the backs of uniforms for the first time in a game between the Indians and the Yankees.
Posted by Jets Break Jaws at 5:29 PM