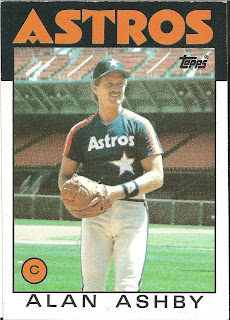 Card thoughts: Alan Ashby is a perfect symbol of the commodification of punk into a simple rebellious pose, devoid of politics or authentic angst. With his band of tatted up models (I mean musicians) in Of Mice and Men, Ashby plays dull scream-o that 1,000 Warped Tour bands have polluted  today’s youth with over the past several years. Hey, angry youth: Why not some Youth of Today, Masshysteri, or perhaps original, authentically angry scream-o bands Shotmaker, New Day Rising, and Poison the Well . . .

What? It’s not that Alan Ashby? Oh, this Ashby sports non-ironic mustaches (he played in the 70s) and has no interest in going to see Paramore at the House of Blues? Well, okay then!

Although these kinds of cards are kind of dull, in some cases, they seem almost poetic. Ashby is relaxing on a sunny morning on an empty baseball field (although this field is the decidedly unpoetic Candlestick Park).

The player:  Ashby started his career with the Indians where, after two seasons where he only appeared in a handful of games, he shared starting duties with John Ellis in 1975 and Ray Fosse in 1976. Ashby didn’t hit much, however, and was traded to the Blue Jays after the latter season, in the first ever trade by that club.

No longer sharing catching duties, Ashby caught a career high 124 games for the expansion Blue Jays, but still only hit .210. His defense, while decent, was not extraordinary enough to carry that low average. Ashby once again platooned in 1978 (this time with Rick Cerone), and he finally started to hit, belting 9 home runs and hitting .261 in 264 at bats.

In a fortunate turn of events, Ashby was traded to Astros in the off season for Joe Cannon (regular backup outfielder for one Blue Jay season), Pedro Hernandez (no major league impact), and Mark Lemongello (1-9, 6.29 ERA in his only Blue Jay season). In contrast to the people he was traded for, Ashby became a decade long fixture behind the plate in Houston in the next decade.  The first three seasons with the Astros, he was a starter. 1982 was the best of these seasons, as Ashby hit 12 home runs, drove in 49, and had a .257/.311/.416 triple slash line.

But by 1983, Ashby’s hitting had declined once again, and he lost the starting job to Mark Bailey for the 1984 and 1985 seasons. But with Bailey struggling for much of 1986, Ashby regained his starting job where he hit .257. The following season was perhaps his best, as he posted career highs in every major offensive category. Despite this, the Astros had a young up and coming catcher named Craig Biggio they wanted to try behind the plate, so Ashby saw his playing time decline in the next two years until he was released in May of 1989 after only 22 games.

In retirement, Ashby has coached and managed in the Astros’ minor league system. For years, he was also to milquetoast color man on Astros radio with Milo Hamilton. After color TV analyst Jim Deshaies left for the Cubs job, Ashby joined the Astros TV  broadcasting team for the 2013 season. He almost immediately got in hot water by implying that Rangers pitcher Yu Darvish was some American-hating immigrant who didn’t want to learn the language.

To my surprise, there is no relation between Andy Ashby, former major league pitcher, and Alan. 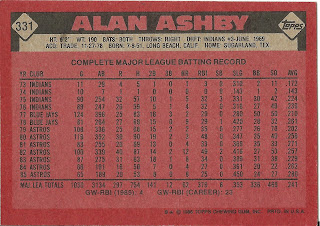 Rear guard: Nowadays, once a catcher becomes a backup, he generally stays in that role. For most of baseball history, almost all non-star catchers moved between the two roles, often with the same team.
Posted by Jets Break Jaws at 11:27 AM