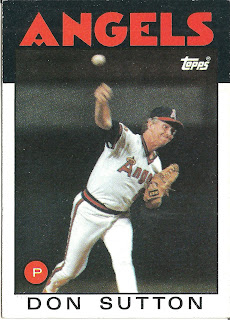 Card thoughts: A night shot! This is the first in the set, and I can’t recall any others off the top of my head. No doubt, this was because Topps had a West Coast photographer who was able to capture Sutton in an Angels uniform despite the fact that he only pitched 5 late season games for the team. This game was either against Texas or the White Sox.

The player: If you look at Sutton’s Hall of Fame career, there aren’t many seasons that stand out. In an era when the no decision was rare, Sutton racked up lots of seasons where he hit double digits in victories, but also losses. Relying more on guile than over powering batters, Sutton was able to be a consistently effective pitcher into his early 40s. Of course, there were rumors that in his later years, Sutton was scuffing the ball.

As so many of his seasons were similar, I’ll break Sutton’s career down into five year chunks:

(1976-1980): Sutton’s ERAs began to rise a bit in this period, but the Dodgers were a much better team than they were in Sutton’s early years. He was able to go 75-49, despite his ERA going up by a half a run. Sutton’s record was buoyed by his first 20 win season (1976) when he went 21-10 and had his highest showing on the Cy Young ballot. Sutton also led in ERA in 1980 (2.02). Another feature of these years is that Sutton’s strikeout rate began to drop dramatically. For a guy who used to strike out 6-7 guys in nine innings, he was down to about 5. Sutton pitched twice in the post season during this time: He was good in 1977 and really bad in 1978.

Sutton holds the record for most career at bats without a home run (1354), and the man was an abysmal hitter (.144 career average). He was a great fielder however, and Sutton is in the top 50 in wins (14th); strikeouts (7th); and shutouts (10th). There was some debate on whether Sutton was a worthy hall of famer because his high numbers of losses, but he was elected with 81% of the vote his fifth year on the ballot.

In retirement, Sutton has been a color man for the Braves and the Nationals. 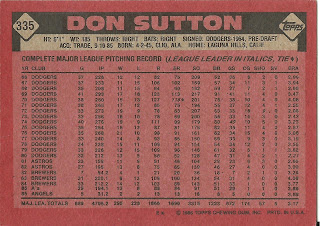 Rear guard: I really think Topps owed Sutton a card ending in "0." He was still an effective pitcher when this card was issued, and he had won 295 games.
Posted by Jets Break Jaws at 9:44 PM