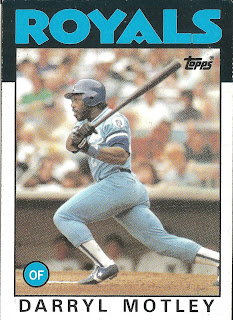 Card thoughts: This is the name of a Hanna-Barbera villain.

The player: Motley was drafted by the Royals in the 2nd round in 1978, but didn’t hit for much power for a corner outfielder. After an solid but unspectacular climb through the Royals minor league system, he became the big club’s regular right fielder after the strike, since opening day starter Clint Hurdle had been injured in June, just before the work stoppage. But Motley wasn’t seasoned enough, and his pedestrian .588 OPS earned him another full season at Omaha in 1982.

When Amos Otis, the long-time outfielder for the Royals, left as a free agent, Motley earned the starting role in right in 1984. Playing a career high 146 games, he had an above average OPS on the strength of 25 doubles, 6 triples, and 14 home runs. Despite these numbers, Motley found himself in a platoon with Pat Sheridan in ’85, and his numbers suffered. Overall, he did slug 17 home runs, but his average plummeted to .222. Although as a right handed hitter he mainly played against lefties, he hit only .198 against them.

In a memorable post-season moment, Motley crushed a home run off John Tudor in Game 7 of the World Series, after breaking his bat by slamming it on the plate after hitting a long foul in the same area. In those days, bats broke less often, so he didn’t have another of his bats available, and instead picked a random black bat, with which he hit the homer.

Despite hitting .364 in the World Series, that success did not translate to the next season, where Motley’s .203 average led the revolving door in right with Mike Kingery, Rudy Law, and Bo Jackson all putting in significant time at the position.

Soon Motley was out to door, banished to the minors league system. He soon left the country, and played for several foreign teams in Mexico and Japan. Finally back in the states, he played for seven years in independent ball finally retiring at age 42. 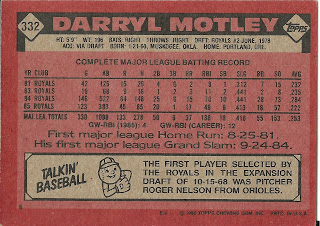 The two guys picked after Nelson (Don Mincher and Tommy Harper by the Seattle Pilots) were way better players than he was. Nelson was a bullpen guy who was fairly unremarkable. However, he found some spotty success with the Royals, going 7-13 with a fine 3.31 ERA in their inaugural season. After a few years battling injury, his 2.08 ERA in 1972 was good enough for eighth in the league in 1972.

Here's Nelson's card for 1969, his first for the Royals (although he's actually in an Orioles uniform . . . the hat is blacked out.)
Posted by Jets Break Jaws at 10:31 PM