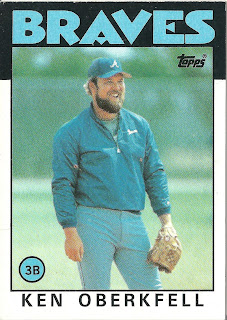 Card thoughts: Another card that gives me nightmares of listening to the steady drone of Skip Caray announcing Braves games on TBS with a bunch of over the hill veterans playing home games in an empty park. Must . . . stay . . . awake.

But note the beard. Oberkfell was part of a trio of “Bearded Braves” (Bruce Sutter and Glen Hubbard were the other two) in a time where the preferred facial hair was the mustache.

The player: Oberkfell had a second baseman’s bat (the position he primarily played when he first came up), who moved over to third, where his line drive stroke led to a lot of hits, but little power, and no clutch hitting ability.  He was a consistent fielder at the hot corner, however. This is not the kind of hitter you look for in a third baseman.

Oberkfell was not even drafted when he signed with the Cardinals in 1975. The other teams must have missed something, as he climbed fairly rapidly through the Cardinals system on the strength of an excellent batting eye, and good batting average.

After two cups of coffee, Oberkfell became the starting second baseman while still technically a rookie in 1979. (Note: My great aunt game me some old “Bananas” magazines from the 70s, and in one there was an uncut sheet of Topps Cards. The Oberkfell rookie was the one I remember). Anyhow, his rookie season resembled his minor league ones, as he hit for a high average, got on base a lot, but didn’t reach the fences too much (19 2B, 5 3B, 1 HR, and a .388 slugging percentage).

As a starting second baseman who generally hit 2nd or 8th in the order, these numbers were good. However, once Ken Reitz was traded (for future Bearded Brave Bruce Sutter) to the Cubs in 1981, Oberkfell was switched to third, where his numbers in comparison to other third basemen in the league, were not good. However, he was valuable in the 2nd spot, where he batted .292 in the 1982 World Series to help the Cardinals win the World Series.

In 1983, Oberkfell had perhaps his finest season. Due mostly to his superior defense, his WAR was 3.2 that season, but he also had a career high 143 hits, to go along with a .293 batting average. He was hitting about the same in 1984 when he was traded to the Braves midseason for veteran bench presence Mike Jorgensen and lefty reliever Ken Dayley. The Cardinals, who were going through a stretch when they had few legitimate power hitters, liked the power potential of young Terry Pendleton more than Oberkfell’s line drive bat.

Despite leaving a home park where the home run was rare, and going to a home park nicknamed “The Launching Pad,” Oberkfell remained the steady line drive hitter he’d always been. He was very consistent while he started at third with Atlanta. Oberkfell generally hit about .275 and drove in about 40 runs. His defense remained a plus asset. By 1988, however, the Braves were going nowhere, and wanted to try rookie Ron Gant at third. So Oberkfell was sent to the contending Pirates for reliever Tommy Gregg.

The Pirates didn’t win the NL East, and Oberkfell settled in as a useful bench player. Not useful enough for the Pirates, however, as he was shipped off after only 19 games to the Giants for yet another middle reliever. This rejuvenated the bearded one.  After hitting just .125 for the Pirates, he hit .319 as a pinch hitter and backup third and first baseman for the division winner. After going hitless in the NLCS he had an .889 OPS in the World Series. 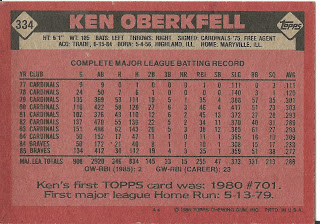 Rear guard: Oberfell's rookie card was discussed earlier. As Oberkfell only hit 29 career home runs, no doubt his first (the only one he hit in 1979) was pretty memorable. It came against the Braves off of Hall of Fame pitcher Phil Niekro. It also drove in starting pitcher Pete Vukovich, who got on base via a fielder's choice.
Posted by Jets Break Jaws at 1:30 PM