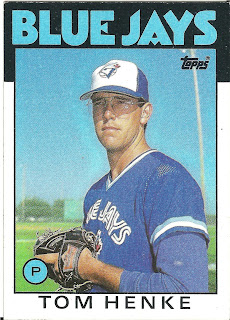 Card thoughts: This picture was obviously taken on the same day as #312 Tom Filer’s earlier in the set. This is his first Topps card.

The player: Henke was nicknamed “The Terminator” for his ability to close games. Throwing a splitter, slider, forkball and fastball, he was drafted by the Rangers in 1980. Although impressive in the minors, the team felt his lack of control made him suspect in the bullpen.  Henke was chosen from the Rangers as a free agent compensation pick in 1985.  After spending the beginning of the season dominating the International League (0.88 ERA and 17 saves in 39 games), he was up for good with the Blue Jays, where he shared closing duties with veteran Bill Caudill and Jim Acker. Due to his youth, Henke was generally put in non-save situations in the ALCS, but he won 2 games in relief after the Blue Jays came back to beat the Royals in the late innings in Games 2 and 4.

Acker and Caudill were mediocre in 1986, so Henke became the primary closer, a position he would hold until retired. He was so remarkably consistent over the years, that it is hard to pinpoint a standout season. However, 1987 would be a good candidate. That season, Henke led the league in games finished (62) and saves (34) while making his first All Star game. He pitched 2 2/3 innings in the game and gave up 2 hits. However, Henke collapsed at the end of the season, blowing 4 saves, and his agent accused manager Jimy Williams of purposely allowing him to get roughed up against the Brewers.

Despite being at the time the greatest reliever in Blue Jays history, the team felt that cheaper option Ward could ably fill Henke’s shoes. Signing with the Rangers, he saved 40 his first year with the team, but pitched poorly for the first time in a decade, as he battled back problems and blew nearly 30% of his save opportunities in 1994.  Allowed to leave as a free agent, he signed with the Cardinals. In what was his best year since 1987, Henke saved 40, and had a 1.82 ERA. He was honored by being named to his second all star team, where he struck out Mo Vaughn, and induced Paul O’Neill to fly out to center.  That season, Henke also became the 7thth player to reach the 300 save mark, a number that should be a standard hall of fame threshold for relievers.

Henke had already decided that 1995 would be last season (in fact, he signed with the Cardinals because his home was only a few hours away). So despite the impressive numbers, that would be it for Henke. 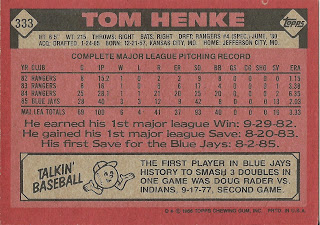 Rear guard: I really think there must have been a better stat to cite than "First Save for the Blue Jays" (although, in light of Henke's 200 or so future saves with the Blue Jays, maybe quite prophetic).

Doug Rader, I always got confused with Dave Rader (although they are no relation). Rader was playing his last season while with the Blue Jays, which is pretty surprising because he was just 32, and had an above average OPS. Rader smashed 245 doubles in his career, and 18 with the Blue Jays in 1977. Here's his card from that year.
Posted by Jets Break Jaws at 10:55 PM