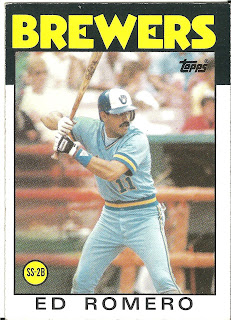 Card thoughts: Finally, an action shot. Although, I’m not sure I can place the stadium. It isn’t Yankee or Tiger Stadium. I recall the old County Stadium had this color, but Romero’s wearing an away uniform. Any guesses?

The player: Romero had been a late inning defensive replacement for several years with the Brewers by the time this card was issued. His best position was second base, but he also played a little third and short. Romero couldn’t hit a lick, but relied on good range and an accurate arm to keep himself in the bigs.

In the minors, Romero primarily played shortstop. But of course Robin Yount had a lock on that position with the Brewers. So he needed to be versatile to stick in the majors.  Coming up initially in 1977, Romero didn’t play regularly until 1981 when he (barely) helped the Brewers to the Eastern Division crown by batting .198. He was on the ALDS roster, however, and he started at second for the deciding Game 5. Romero delivered a hit in two at bats and scored a run but it wasn’t enough as the Yankees defeated the Brewers 7 to 3.

Despite hitting better in 1982, Romero was left off the roster and did not participate in the World Series that year. By default, he was the starting third baseman in 1984, as three other players (#209 Randy Ready, Roy Howell, and Willie Lozado) also started at least 30 games there (Romero started only 40).

A big position player shuffle went on in 1985, with Paul Molitor moving to third, Earnie Riles taking over for Yount at short, and Yount moving to left field. Romero was the odd man out, and went back to the bench, hitting .251 in 251 at bats while playing shortstop, second base, and the outfield.

The Brewers traded Romero to the Red Sox after the season for pitcher Mark Clear, and, despite only hitting .210 during the regular season, he managed to make it onto the post-season roster. He mainly was there as a defensive replacement, and failed to get a hit in three post-season at bats. Romero hit much better in 1987, but barely played in 1988. He was hitting just .212 in 1989 and got into a running feud with manager Joe Morgan over playing time. The manager showed him up by pinch hitting for him after he had run the count to 3-0, and Romero hurled a Gatorade cooler onto the field in protest. He was released soon after and went to the Braves for 7 games, but was quickly acquired by the Brewers who were only 2 ½ back in the East at the time (the Brewers had lost both of their starting second basemen to injuries a week apart).

Despite being back where he was most comfortable, Romero continued to struggle at the plate, hitting only .200 the rest of the way. A 32 game stint in Detroit the following season ended a career where his WAR was -5.8; he never had a season where the average player couldn’t have taken his job and done it about the same.

After he stopped playing, Romero managed in the minors, and did some minor league infield instruction for a variety of teams. He coached for the Astros from 2008-2009. 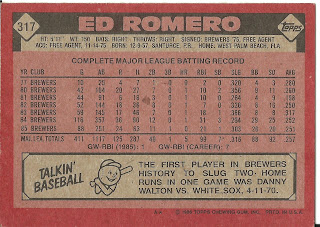 Rear guard: 1970 would be the only year Danny Walton was a regular player. He was a good power hitter for the era, sporting a .790 OPS. But he would never again play in more than 40 games a season during his nine year career.

Walton also contributed a double to his power barrage. Both homers were off of a starter I've never heard of, Billy Wynne. Walton would only hit 28 homers in his career. Here's his card representing his 1970 season. He would show up as "John Ellis" on a later card by Donruss in the '81 set (those early Donruss sets were lousy with errors).
Posted by Jets Break Jaws at 8:58 PM

It looks to me he's at the Big A in Anaheim, California. The orange padding near the dugout gives it away.