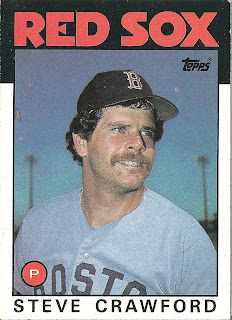 Card thoughts: Another baseball season over. Even though the team I follow tanked (as usual), I'll still be sad all winter long as the wind howls around the house and snow and sleet eddy up onto the porch. Hopefully, this blog will keep me (and anyone who may be reading this) dreaming of a warm summer day at the ballpark. Of course, with these players, I might start dreaming of long ago summer days of playing pickup basketball (and baseball) and riding up to Revco or going to Gary's Dugout to pick up some more cards. Well enough of this Proustian nonsense (I guess I am reading Within a Budding Grove). On to the set!

This card has the same lighting as #11 Bob Ojeda and was no doubt taken on the same day in Florida (note the dual palm trees perfectly framing Crawford). This is the first of the "sweaty" Red Sox cards. A very famous Red Sox later in the set looks even greasier than this guy.

The player: Crawford came up in 1980 and pitched sporadically out of the bullpen (and as a starter in an ill-fated 1981 campaign), before 1985. In the days before every team had an everyday closer, Crawford shared that role with Bob Stanley during the season shown on this card. It would be his best year. He had 12 saves to go along with a career high 91 innings pitched. He would win 2 games in relief during the post-season for the pennant-winning 1986 Red Sox, but would only pitch one more season with the Sox before he signed with the Dodgers, who he never pitched in the majors for. The next year, he signed with the Royals and pitched 3 more seasons with them as a middle reliever, retiring in 1991. 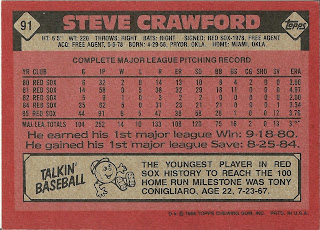 Rear guard: Crawford's first win shows how much the game has changed. It was a complete game victory over the Rangers where he gave up 12 hits, 3 runs, and 2 walks. They didn't have pitch counts back then, but I'm guessing he threw more than 120 pitches.

Tony Conigliaro's career hit a setback the year he reached 100 home runs. He was hit in the eye by a pitch on August 18 and missed the rest of the season and all of the next. Although he had his best season a year after he returned, hitting 36 home runs and driving in 116 runs in 1970, he essentially retired by the age of 26 due to persistent vision problems.
Posted by Jets Break Jaws at 11:11 PM