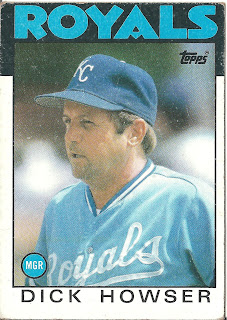 The player/manager: Howser was a hotshot young prospect whose career was derailed by injury, as was his managerial career, and, ultimately, his life.

A leadoff hitter with blazing speed and a great batting eye, Howser twice scored over 100 runs: Once as a rookie with the Kansas City A's, again in 1964 for the Angels. These would also be the only years he played more than 100 games. In fact, he managed to play every game in 1964, establishing a record by playing 162 games at shortstop (this record has been tied many times since).

After Howser ended his career with the Yankees in 1968, he immediately moved on to the Yankees coaching staff, where he coached for a decade. After one season off coaching in college, the Yankees brought him back to manage in 1980. He did not disappoint, leading the Yankees to a 100+ win season, and the AL East crown. This did not endear him to irascible boss George Steinbrenner, who was miffed that Howser dared to hang up on him when he called the clubhouse.

Howser was fired after that one season with the Yankees, and the Royals would pick him up the next season. He would manage the rest of his 7 year career with them, never finishing lower than second place. His crowning achievement would be piloting the Royals to their only World Series win, the year shown on this card.

Unfortunately, Howser would not be able to bask in too much glory. While managing in the all-star game in 1986, he kept messing up signals. The cause was a brain tumor, which Howser would battle for another year, before dying in 1987.

Howser does have couple of other lasting legacies: His number 10 was retired by the Royals, and the trophy for the best college player is named after him. 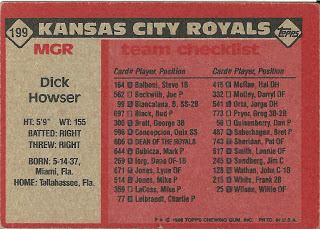 Rear guard: The massive omission here is Danny Jackson, who won 14 games, including a game in the World Series, in 1985. Jackson has Fleer and Donruss cards this year (and in 1984), but no Topps card until the 1987 "Traded" Set. He must have been one of those rare players who did not sign a contract with Topps.

This date in baseball history: Steve Garvey breaks Billy Williams' National League record for consecutive games played  with 1,118 games in 1983. The streak will about 90 games later after Garvey dislocates his thumb.
Posted by Jets Break Jaws at 7:18 PM