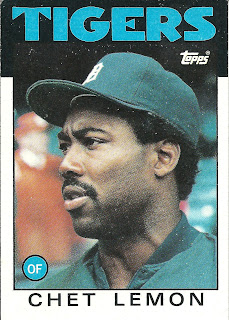 Card thoughts: I swear, every Tiger card shot was taken on a dismal cold cloudy day. "Chet" is one my favorite names, probably because I read a lot of Hardy Boys as a kid and their bumbling, rotund chum was named Chet Morton.

The player: Lemon was drafted in the first round by A's, but he was traded before he ever reached the majors with them. In the minors, Lemon was a third baseman and came to camp with the White Sox expecting to make the team in that capacity. But his fielding wasn't up to major league standards so he was put in center, where he excelled. In center, Lemon had tremendous range, setting an American League record with 512 putouts and 524 total chances in 1977. As a batter, Lemon leaned out over the plate, which meant he led the league in being hit by pitch 4 times. But he was also a consistent .300 hitter in the late 70s and early 80s, and was the White Sox lone all star representative in 1978 and 1979. His best season with the Sox came in 1979 when he led the league in doubles with 44, hit a career high .318, and drove in 86 runs.

In a straight up deal for another outfielder, Lemon was dealt to the Tigers for Steve Kemp after the 1981 season. With the Tigers, Lemon's average dropped, but his power numbers increased. Playing on a winning team for the first time in his career, Lemon his over 20 home runs three times in his 9 year Tiger career. After being hitless in the 1984 ALCS, Lemon hit a respectable .294 in the World Series. He was a popular player in Detroit, as evidenced by this promo spot.

Lemon eventually moved the right field when Gary Pettis arrived in 1988. The next season, he was stricken by a rare spleen disease and missed a significant number of games. After attempting a comeback in 1990, the disease forced him into retirement. The spleen has since been removed. 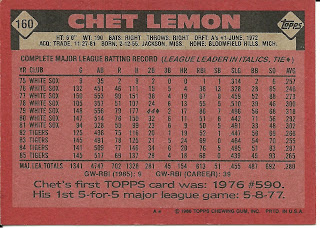 Rear guard: Here's his first card. As for his fellow rookie outfielders, Ellis Valentine would have several good years, including an all star game appearance, with Expos and would hit .278 over a 10 year career; Terry Whitfield will be discussed later in this blog; and Henry Cruz played 53 games for the Dodgers in 1975, which is a bit much or someone appearing on a prospect card. Anyhow, he only lasted 4 seasons and finished with a .229 average. Lemon would get a All Star Rookie Cup on his first solo card the next year.

Two of Lemon's five hits were doubles; he was also caught stealing once. He scored on a single by Jim Essian in the 8th inning, and drove in Oscar Gamble with a single in the 5th.

This date in baseball history:  In 1976, in a decision that changed baseball forever, Andy Messersmith and Dave McNally successfully challenged the reserve clause after playing the 1975 season without a signed contract. They would be the fist ever "free agents." McNally ended up retiring and Messersmith, once a star pitcher, wasn't the same after signing with the Braves.
Posted by Jets Break Jaws at 11:29 PM