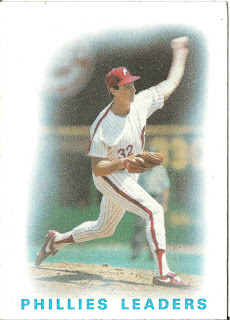 Card thoughts: The Phillies had an off year in 1985, as they went 75-87, finishing 5th. They would rebound the subsequent season to finish in the 1st division in the NL East.

The player: #120 Steve Carlton is discussed in great length earlier in this blog. He was nearing the end of his career, and did not lead the Phillies in any pitching category. The 2nd longest tenured Phillie was fellow hall-of-famer Mike Schmidt. 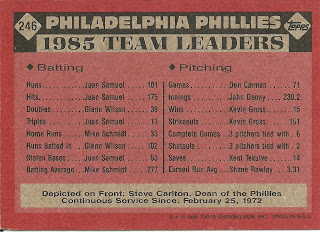 Rear guard: About what you would expect on the hitting side of the leader board, except the astonishing fact that Glenn Wilson, having a career year, would lead the team in RBIs. Wilson would never again come close to 100 RBIs, and was better known for his awesome arm in right field than his hitting.

On the pitching side, a bunch of unmemorable names other than Kent Tekulve, nearing the end of a great career, and Kevin Gross, who was suspended for scuffing the ball in 1986.

This date in baseball history: Milt Pappas of the Cubs loses a perfect game in 1972 on a controversial call by the home plate umpire in 1972. After Larry Stahl walks on a 3-2 pitch, Pappas retires Gary Jestadt to get a no-hitter.
Posted by Jets Break Jaws at 4:52 PM