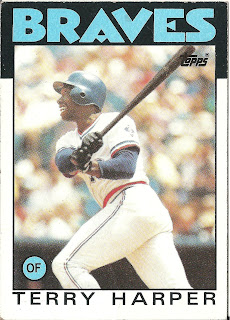 Card thoughts: A rare, in action Braves shot. Very sunny all around.

The player: It took Harper 11 years to reach the majors. Although he was never expected to become anything more than a spare outfielder when he came up in 1982, Harper won a starting role in left field in 1985 (when Gerald Perry moved to first base) and he made the most of it, hitting a surprising 17 home runs and 72 RBIs.

Harper was displaced as a starter for some reason in 1986 by ancient, creaky #40 Ken Griffey. Although he would play over 100 games that season, Harper only played one more in the majors after that, splitting the 1987 season between the Tigers and Pirates, hitting .246 in 130 at bats. He did play one season in Japan after his major league career was over.

Harper is now a private hitting instructor at Sports-A-Rama in East Cobb, GA. 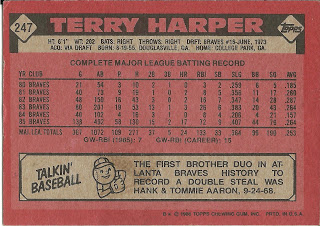 Rear guard: The ever present gum stain. I'm not sure At-lanta needed to be put on 2 lines. Poor Tommie Aaron, always playing in the shadow of big brother Hank.
Posted by Jets Break Jaws at 9:49 PM