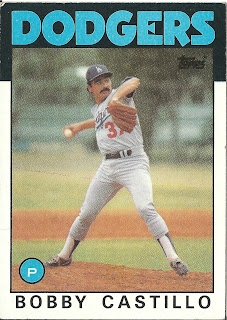 Card thoughts: There’s nothing sadder than getting a card with a pitcher pitching all alone. Especially on a cloudy day in Florida. No doubt, Topps caught Castillo in a simulated game or workout session. This is the second last Topps card of a player in row. That mustache may be Castillo’s most defining characteristic as it jumps out at you on every card in his career.

The player: Castillo was drafted in 1974 by the Royals as a third baseman/outfielder. After hitting just .253 in rookie ball, he transitioned to being a pitcher. Apparently, he was loaned to the Mexican League for two seasons to hone his craft. The Dodgers eventually bought him from the Royals and assigned him to AAA Albuquerque. Castillo made his debut in relief in September and gave up 2 runs in an inning and a third.

Bouncing between Albuquerque and the big club for the next two seasons, Castillo finally made an impression in 1979 when he went 2-0 with a 1.11 ERA in 19 relief appearances. He even saved 7 games in limited opportunities. This earned Castillo a full time look, and he would have his best season as a reliever in 1980, appearing in 61 games, saving 5, and sporting a fine 2.75 ERA. The key to Castillo’s success was his mastery of the screwball, a pitch very few pitchers threw, thus making it even more baffling to hitters.

Castillo would teach his screwball to Fernando Valenzuela, thus helping launch an extraordinary career. Castillo’s took a turn for the worse, however, as he was unable to help the World Series Champion Dodgers much in ’81 as he held a plus-5 ERA. This poor performance encouraged the Dodgers to trade Castillo to the Twins in the off season for Scotti Madison, a third baseman who had torn up the California League but who never made the majors with the Dodgers.

The Twins decided to have Castillo start, and he split the 1982 season between the ‘pen and the rotation, in the process going 13-11 and winning Twins pitcher of the year honors. He was made a full time starter the following season, but it didn’t go so well, as he lost as many as he had won the previous year, but with only 8 wins. Back to relief in ’84, he was once again effective with a 1.78 ERA, but Castillo was injured most of the year.

Castillo signed as a free agent with the Dodgers in 1985, and in his final season he failed to match his early relief magic with the team as he had a 5.43 ERA as a starter and reliever. That was it for Castillo’s major league career, although he resurfaced in 1987 with Chunichi Dragons of the Japanese Baseball League.

Since his retirement, Castillo has been involved with in a history project archiving Mexican-American baseball players. 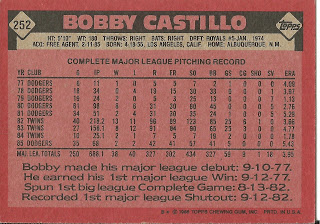 Rear guard: Kind of surprised that there is no "Talkin' Baseball" on here, as some of these firsts are pretty pedestrian. Castillo's debut has already been discussed. His first win came in the 10th inning in a Padres-Dodgers game, after Mike Garman had given up a double and hit a batter. Castillo came in, walked a guy to load the bases, gave up an RBI groundout, and then got #190 George Hendrick to pop out. Ron Cey his a game winning 2-run home run in the bottom of the inning off #185 Rollie Fingers to win the game.