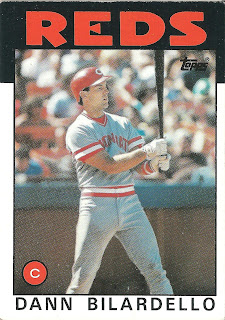 Card thoughts: What’s the deal with the extra “N” on Dan? Always unusual to see a catcher at bat. It’s such an interesting position, that generally the shots (especially in this set) show the catcher in full crouch. Bilardello’s 1984 and 1985 cards are much more exciting catching action shots.

The player: Bilardello is the second of the trio of catchers the Reds used in 1985 (#143 Dave Van Gorder was covered earlier in this blog).

Drafted by the Reds in the Rule V minor league draft in 1983, Bilardello was forced onto the major league squad the entire year, skipping AAA. For a catcher, he had a decent offensive season. He hit his first major league home run off Tom Seaver, and added 8 more to go with a .238 average, while starting the majority of games at catcher (in another three way split with Alex Trevino and Alan Knicely).

Bilardello really made his mark on defense coming fourth in fielding percentage in his rookie year (.991), and catching over 40% of base stealers in both 1984 and 1985 (leading the league in that category in 1984, despite being a backup catcher).

His hitting, even allowing for the lower expectations at the catching position, was too poor to make up for his stellar defense, and he began to losing playing time to the other catchers on the Reds roster. Only 17 hits and a .167 average in the year shown on this card convinced the Reds to add him in a package deal with the Expos. Bilardello’s 212 plate appearances with the Montreal club were the most he had since his rookie season, but he still hit only .194, albeit with good power (out of 37 hits, 5 were doubles and 4 were homers).

As the case with many marginal catchers, Bilardello was a natural coaching and managing candidate. From 2002-2005, and again from 2010-2011, he managed A and Short-season ball in the Dodgers and Mets organizations. 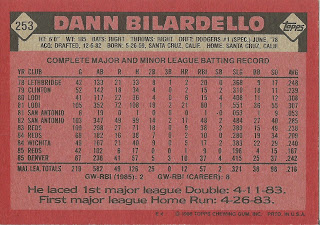 Rear guard: Bilardello was involved with much of the scoring action in the Reds 5-1 win over the Cubs on April 11. Bilardello first big league double drove in #65 Dan Driessen and Ron Oester for the first two runs. He later scored in the inning on #224 Cesar Cedeno's home run.
Posted by Jets Break Jaws at 11:09 PM