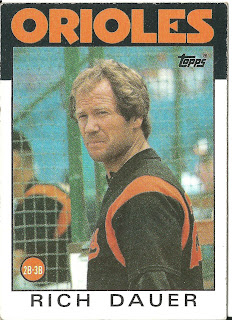 Card thoughts: This would be Dauer’s last Topps card. He had spent his entire career with the Orioles. And with the hat off, Dauer looks like one of the coaches.

The player: Dauer was a good contact hitter, and a steady fielder at both second and third. In fact, at second he set an American League record with the most straight errorless games at second (long since broken). Dauer’s skill set bears an uncanny resemblance to that of the Cubs’ second baseman Darwin Barney.

Dauer was an All-American who led his college team, USC, to two straight College World Series wins. Drafted in the first round by the Orioles, he was sent directly to AA Asheville where he hit over .300.  In ’75 he was mediocre at AAA, but repeating the league in 1976, Dauer won the International League MVP award in an odd three-way tie.

Although he debuted with the Orioles that season, and he was the opening day second baseman, Dauer ceded a substantial amount of playing time to fellow youngster Billy Smith as his average of .259 was not deemed high enough for an everyday player by manager Earl Weaver. In 1978, he finally became the regular second baseman (although he also backed up Doug Decinces at third) and hit .264, striking out only 22 times. For the 1979 Pennant Winners, Dauer hit a career high 9 home runs and drove in 61. In the World Series he hit .294, and his solo home run was the only run the Orioles would score in their Game 7 loss.

As the eighties dawned, Dauer was a mainstay at second, anchoring the Orioles infield while also filling in at third and the outfield. His best season in this stretch was in 1982 when he played in a career high 158 games and also reached highs in hits (156), and runs (75),  while hitting .280. The next season, the Orioles reached the World Series and won it this time, with Dauer contributing 3 RBIs in the effort.

Dauer’s playing time declined steadily until a weak .202 average in the year represented by this card convinced him to retire. He became a third base coach with the Royals and Indians. This is the position Dauer currently holds with the Rockies. 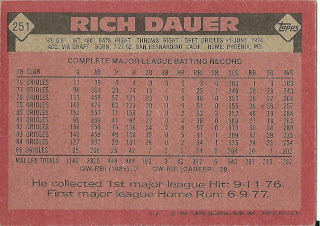 Rear guard: Dauer's first hit came in his first major league at bat facing the Brewers. Pitcher Jim Colborn served up a single to left. Dauer later in the game drove in Bob Bailor on a groundout to second.
Posted by Jets Break Jaws at 10:17 PM