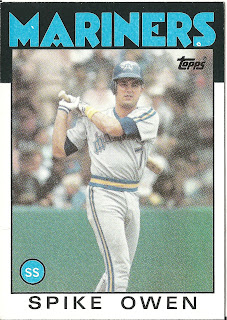 Card thoughts: “Spike” and “Butch”: Always nicknames of the “tough” kids in juvenile adventure stories. But for Spike Owen, Spike was his real name.

The player: Spike Owen was a number 1 draft pick by the Mariners after starring at the University of Texas. He sped through the minors in two years, not necessarily because he excelled (he hit only .266 over 150 games), but more because the Mariners were a terrible team that really needed a good shortstop. Owen took over in 1983 for Todd Cruz as the starting shortstop, but he only hit .196. The next year was better, as he had a career high 530 at bats and hit .249, to go with 16 steals. The next two seasons saw similar numbers for Owen, but they liked the Red Sox starting shortstop, Rey Quinones better, so the two were swapped for each other near the end of the 1986 season.

Neither player hit particularly well for their new teams, but Owen redeemed himself in the playoffs, hitting .429 in the ALCS and .300 in the World Series. In the subsequent 2 seasons as a starting shortstop for the Boston Red Sox, Owen performed to his norms, hitting about .245 a year and playing a good shortstop.

In 1989, Owen was once again traded for a younger shortstop (this time Luis Rivera of the Expos). He was well suited to the National League. As the eighth place hitter, Owen walked at least 70 times in both 1989 and 1990, and rarely struck out. This somewhat made up for batting around .230 both seasons. The move back to artificial turf also improved his fielding—Owen established a National League record by having 63 straight errorless games at shortstop in 1990.

Although his average improved to .269 (his career high at that point), and he continued to be an above average fielder, the Expos did not resign him after the 1992 season. For yet another time, Owen was replaced by a younger option with more potential, this time by Wil Cordero (who was a wife beater, and became one of the all-time loathed baseball players).

Owen signed a three year, highly paid contract with the Yankees, when they gave those out to every willing veteran. But he only lasted one season with the Bronx Bombers, and had to fight for playing time at short with a motley collection of spare parts, including Mike Gallego and Randy Valarde. Wanting to dump the very expensive, and rapidly aging, Owen, the Yanks pawned him off on the Angels for anonymous minor leaguer Jose Musset (21 saves at Midland that year, but a 5.49 ERA—never made the majors).

Owen had a good capstone to the last two years of his career, hitting a career best .310 in 1993 while starting at third base for the first time. A .229 average in 1995, and the expiration of his contract, signaled the end of the line for Owen.

Owen coached for many years with the Round Rock Express, the AA farm club Astros, and later the AAA club for the Rangers. He has a baseball stadium named after him in Bay View, Ohio. 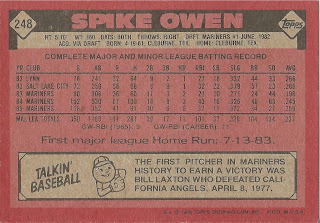 Rear guard: Owen's first home run came off Doug Bird and accounted for the final tally in the Mariners 6-4 win over the Red Sox.

Bill Laxton only had 3 wins in his entire career, which was a spotty one, as he lost 10 games. His win came in relief of Tommy Moore who blew a save, although Laxton's 2 walks led to that blown save. I believe Laxton only had one card in 1977 that showed him airbrushed into a Mariners hat.
Posted by Jets Break Jaws at 9:52 PM