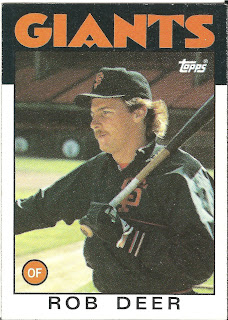 Card thoughts: I forgot that Deer played for the Giants. I remember him mainly as a Brewer or Tiger. This picture is taken before a game at Candlestick Park . . . which looks chilly as always. This is Deer's first base Topps card, and only one as a Giant.

The player: While Deer was not a particularly good player, he is an important harbinger of the type of player much more common today. This type of player is attempt at achieving on of the so-called Three True Outcomes. You see, when Deer came the plate, he either hit a home run, struck out, or walked. Of his 853 career hits, over a quarter were home runs. He struck out over 30% of the time in his career as well. Mark Reynolds, Adam Dunn, and a myriad of other high strikeout/low average power hitters now in the league: Meet your God.

Deer was already whiffing at a league leading rate in the minors, leading the California, Texas (twice), and Pacific Coast League in strikeouts for 4 years before making his debut with the Giants in 1984. Of course, he also led in home runs in 3 of those years.

He hit only 8 home runs in his first full season with 71 strikeouts and a .185 average. The Giants, feeling he would never hit with enough power at home to make up for his poor average, shipped him to the Brewers for two players who never made the majors. It turned out to be a steal for the Brewers, as Deer was the spark plug for a very successful 1987 team that won a record 12 in a row to start the season. He even made the cover of Sports Illustrated after hitting the home run that won the 12th game. For the rest of the season, Deer hit .232 with 33 homers and his usual astronomically high strikeout totals, this time not leading the league. But Deer was not just a one dimensional player, as he patrolled right field with great verve.

After four more seasons with the Brewers, where he never again hit more than 30 homers [and led the league in strikeouts in 1987 (186--then a record) and 1988 (153)], Deer signed with the Tigers. Tiger Stadium, with its short upper deck porch, was very inviting for someone with Deer's power, but he may have been too eager in 1991, his first season with the club. He hit .179, the lowest ever average for someone with enough at bats for the batting title.  Deer bounced back the next year, hitting 32 home runs (with only 64 RBIs!), and respectable .247 average. But a .217 average in 1993 was enough for the Tigers to sell him to the Red Sox. Between the two teams, he hit .210 with 21 home runs, 54 RBIs, and a league leading 169 strikeouts.

Deer went to Japan for a year, and then attempted a comeback with the Padres where he hit only .180 in 50 at bats, but with an incredible .480 slugging percentage.

Deer is now a roving batting instructor with his first team, the Giants and owns the oddly named Viz-U-Bat company, which does something I don't quite understand. 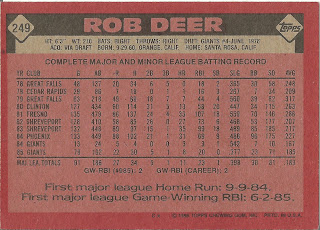 Rear guard: Deer's first homer came off Braves pitcher Rick Camp. His line that day can be a summary of his entire career: in his 3 at bats, 1 homer, 1 walk, 1 strikeout.

This date in baseball history: Huh. Before 1931 in the National League, a ball that bounced over the fence was considered a home run. Al Lopez of the Dodgers hit the last of these "bounce" homeruns in Ebbets Field in 1930.