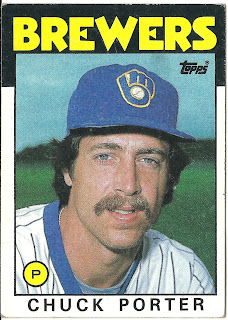 Card thoughts: The only thought I have about a dull card like this, where Porter apparently is sitting on a golf course somewhere, is why he was issued a card at all. He pitched only 13 innings. Well, that, and the fact that the color bleed makes Porter look like his mascara is running.

The player: Porter spent many years in the minors, and really didn’t get a major league shot until the age of 28.

Originally drafted by the Angels after being named the 1976 Atlantic Coast Conference Player of the Year while at Clemson University, Porter went a combined 20-2 between A and AA ball in 1977, his second minor league season. The rest of his minor league career was fairly pedestrian. After a terrible 5-9 5.72 ERA season at Salt Lake City two years later, Porter was released in spring training and picked up by the Brewers.

After two cups of coffee in 1981 and 1982, Porter once again was the last player cut out of spring training in 1983. But he would come up in May to join the Brewers rotation. As an old rookie, Porter did have some success, sporting a fine strikeout-to-walk ratio, yet giving up 162 hits in 134 innings. The next year Porter started out stronger, carrying a 6-4 record and 3.87 ERA into August. But Porter was injury-prone all year and his season ended prematurely when he blew out a tendon in his elbow. This also meant that Porter would not pitch again until the end of the 1985 season, making the Topps choice of issuing a card even more surprising.

Porter was cut from the major league roster in spring training once again in 1986. After spending that entire season at AAA Vancouver, Porter ended his pro baseball career. 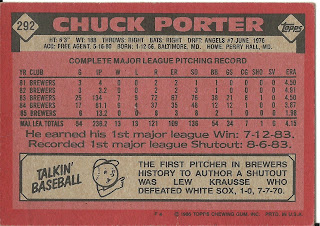 Rear guard: Porter's first major league win came against the Rangers and was a complete game. He struck out 4 and gave up only 2 runs.

Woah! The third line of "Talkin' Baseball" is why justifying the text is not always a good idea. Lew Krausse had a father with the same name who also played major league baseball. The younger Krausse had a fine rookie season (1966) for the Kansas City A's, but was never more than a sub .500 pitcher after that. In 1970, he went 13-18 for the Brewers, and that was his only shutout he threw. Here's his card from that season.

he does have kind of an Alice Cooper look going on one side, doesn't he?