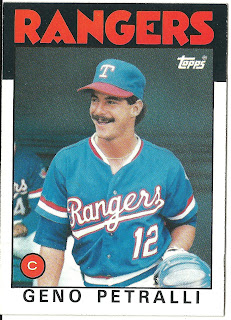 Card thoughts: You are looking at the lost Marx Brother. Geno joined Zeppo,  Harpo, Chico, and Groucho in that classic comedy “Ball Five.” This was Petralli’s first Topps card. He appeared on a Fleer and Donruss card in 1983 as a member of the Blue Jays.

The player:  Petralli started out in the Blue Jays system, but he struggled to get playing time in the minors. As would be a pattern for Petralli in his career, he was frequently used as a backup for other catching prospects. But Petralli got the last laugh as Dan Whitmer, Ramon Lora, Juan Espino, and Kevin Buckley made little to no impact on the majors.

Petralli finally made the team out of spring training in 1984, but he didn’t get much of a chance to play as the Blue Jays had Ernie Whitt and Buck Martinez on the roster as well. He was sold to the Indians in May, and barely played for their AAA club. The next season he once again struggled to get playing time, and Indians released him in May.

This was a stroke of luck for Petralli, especially after the Rangers signed him.  Starting catcher Don Slaught was injured two months later, and Petralli was brought up to share the position with Glenn Brummer. When Slaught came back, Petralli remained on the roster, playing in what was then a career high 42 games.

With Brummer released at the end of 1985, Petralli became the primary backup for Slaught. However in this season there were four catchers on the roster, so he got more playing time moving around the field, spending time at catcher, third base, second base, and designated hitter.  With Don Slaught’s departure in 1986, Petralli became the Rangers starting catcher until 1991. Especially productive for him were the 1987-1989 seasons. For those three years, he never saw his batting average go below .280 and he set career highs in just about every offensive category.

It was during this time period that Petralli was chosen to be knuckleballer #275 Charlie Hough’s personal catcher, and honor that reflected his great fielding ability. That wasn’t enough to stop him from setting a modern day record with 35 passed balls.

Although he caught a career high 118 games in 1990, the increased playing time might have overexposed Petralli to the league, as he drove in only 21 runs and hit .255. He did catch #100 Nolan Ryan’s 300th win, however.  The next season he started the season as the primary catcher, but a back injury sidelined him, paving the way for the arrival of Ivan Rodriguez, who would start at catcher for the next 12 years. Petralli would backup Rodriguez for the next couple of years, but we all know how durable “Pudge” was behind the plate, so Petralli had few chances to play.

Signing with the Cubs in 1993, Petralli was a player-coach for AA Orlando, but an injury caused his retirement later that season.

One of Petralli’s sons plays independent ball (yawn), but the other plays independent music in well-regarded, Pitchfork approved band, White Denim. Just a guess: The hearse driver in this video is young Petralli. My friend Korry once saw them at a backyard party at SXSW in Austin, Texas and said they were killer. 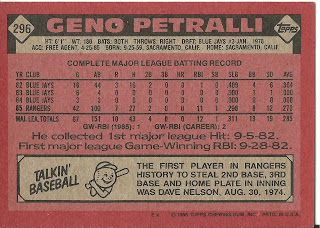 Rear guard: Petralli's first hit was a double to left off Indians pitcher #24 Len Barker. He later added a single and sacrifice hit.

Dave Nelson was the color man on WGN broadcasts for a few years in the 1980s, and he was really terrible. He was a fast guy, but only had a couple of seasons where he topped 30 steals. Although he stole 25 bases in 1974, he was caught 13 times, making him not really that effective stealing bases. Here's the card representing that season.
Posted by Jets Break Jaws at 1:43 PM