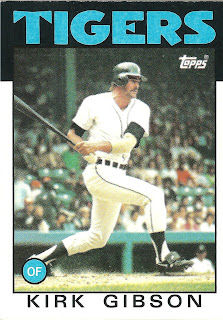 Card thoughts: From this perspective, Gibson looks like he’s playing in front of a model of Tiger Stadium.

The player: A star football player in college (he was drafted by the St. Louis (football) Cardinals), Gibson was known for his hard-nosed, all-out approach to the game. With a rare blend of power and speed, he looked destined for long term stardom. But bad knees derailed his career and limited his effectiveness: As a 12-year starter, he only managed over 600 plate appearances three times. Despite several great seasons, and an MVP award, he never made an all-star team.

It took a while for the Tigers to have confidence in Gibson.  In his first three full seasons, he was the generally the fourth outfielder or designated hitter, and he surprisingly got MVP votes in 1981 while he was in this role. But in 1984 Gibson, who had once been compared to Mickey Mantle, became the Tigers regular right fielder, a position he would hold until 1987.  That 1984 season was magical for the Tigers and Gibson as he finally fulfilled his promise when he hit 27 home runs, drove in 91, and slugged .516. He also stole 29 bases.

In the World Series, as a precursor to his famous home run in 1988, Gibson hit a dramatic three-run home run of Goose Gossage in Game 5 of the World Series that year, solidifying the win for the Tigers. The decision to pitch to, rather than walk, Gibson flabbergasted manager Sparky Anderson, as seen in this dramatic clip (narrated by none other than a civil #291Tommy Lasorda).

The next few years, Gibson put up almost identical numbers. Then, it turned out that he had been underpaid the past few years, a victim of collusion. The courts made Gibson a free agent and he signed with the Dodgers. While not being his best year offensively (he had career highs only in batting average (.290) and runs scored (106)), it was obvious that he was instrumental in the Dodgers winning the pennant, and he won the MVP award in a controversial decision. Many have credited his chastising of Jesse Orosco in spring training for a prank with instilling the team with a renewed sense of professionalism.

Always a fragile player, Gibson injured his knee and hamstring in the NLCS, and was not expected to play in the 1988 World Series. However, with the Dodgers down 5-4 and facing Dennis Eckersley, Lasorda elected to use him as a pinch hitter. Mike Davis had already walked in the inning and had stolen second base. Now you must remember that Eckersley was all but unhittable in 1988, and the sight of Gibson limping gamely to the plate to face him looked to be an extremely uneven match. Or so it seemed. On a 3-2 pitch, he extended his arms to the outside part of the plate and flicked a low hanging splitter into the right field stands. I remember watching this on TV (I was rooting for the Dodgers—I hated Canseco and McGwire) and thinking that was the most incredible thing I’d ever seen in baseball. The image of Gibson gimping around the bases, making a “lock and load” motion with his arm has been burned indelibly in my brain.

The next two years, Gibson battled injuries and couldn’t make it on the field for more than 100 games in any season. Signing with the Royals as a free agent, his health recovered somewhat and he played in 132 games. It was obvious he was past his prime, as he hit only .236 with a scant 16 homers and 18 steals.

He only stayed one season in Kansas City before being signed by the Pirates to platoon in right field with Lloyd McClendon. But Gibson was released in May after hitting just .196 in April. He considered retiring and sat out the rest of the 1992 season. But his old manager Sparky Anderson convinced him to give things another go, and Gibson returned to the Tigers where he mostly DH’d for the last three years of his career. He had one more solid year with the bat in 1994 when he hit 23 home runs and drove in 72.

Gibson is the current manager of the Arizona Diamondbacks and he won plaudits (the NL Manager of the Year award) for guiding that team to a division championship in 2011, his first full year as a manager. Before managing, Gibson was a bench coach on the Tigers and the Diamondbacks. Whenever I see Gibson’s face today, I find it unfamiliar as he no longer sports the trademark mustache of his playing days. His face looks oddly unfinished. 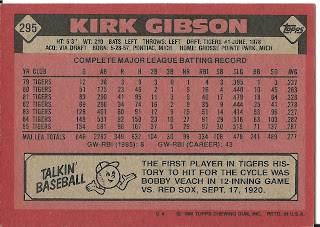 Rear guard: Bobby Veach was an awesome player for the Tigers in the teens and twenties, but had the misfortune (in terms of name recognition) to play along side three Hall of Fame outfielders: Ty Cobb, Harry Heilmann, and Sam Crawford.  In 1920 he drove in 113 runs, but only had 11 home runs. Of course, he also had 39 doubles and 15 triples.

If I recall correctly, I thought that Gibson either begged out of any All-Star Game that it looked like he'd be part of or said that if he was chosen, he wouldn't show up.

So while it's true that he never played in an All-Star Game, it's not because no one thought that he worthy.

At least that's how I remember it.

Gibby may have been fragile but it was likely due to him playing baseball like a football player in his early days as a Tiger. He was always bowling over catchers and diving around the outfield playing every game like a playoff game.
Amazing the same gimpy Gibson ran a 4.2 40-yard dash as a senior at Michigan State.
I very much enjoyed Gibson as a Tigers broadcaster which he did for two or three years after retiring. He had a great perspective and explained things very well. I'm not surprised that he's doing a good job in Arizona.
As far as him backing out of an AS game I don't remember it, but it could have happened.

I remember a highlight from his brief Bucs stint. He was running from first on a hit-and-run and lost his helmet halfway between the bases. The batter struck it perfectly, ricocheting the ball to the defense who easily retired Gibson at 3rd.
He would have been safe by a mile if not for his fallen helmet.