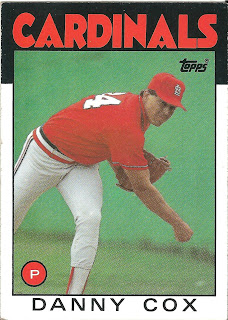 Card thoughts: Interesting card. Cox could be anywhere. Pitching at an indoor practice facility? Warming up on the warning track, the green outfield wall looming behind? On some remote savannah? One thing I do know: Bright red and green do not mix. Even if you aren’t color blind.

The player: Along with John Tudor and #150 JoaquinAndujar, Cox would form a powerful trio for the 1985 pennant winners. This would be his only great season in an 11 year career.

Born in Northampton, England (not sure whether his dad was in the service or not), he was certainly in America by his college years, as he attended Troy University in Alabama. Cox made his debut in 1983, and became a more regular member of the rotation in 1984 when he went 9-11 in 27 starts. He wasn’t afraid to brush back hitters, as his league leading 7 hit batters in ’84 attests.

No one could have foreseen the 18-8 record that Cox had just put up when this card was issued. He also placed in the top ten in ERA (2.88), winning percentage (.667), innings pitched (241), complete games (10), and shutouts (4). Cox played a pivotal role in the post-season, as he pitched brilliantly in the World Series (1.29 ERA over 2 starts), although he did not record a decision.

The next two seasons, Cox was out of baseball, as he tore a ligament in this elbow in spring training in 1989 and needed Tommy John surgery. Frustrated, Cox grabbed a cameraman by his throat at the St. Louis airport when he tried to ask him a question. He resurfaced with the Phillies, where he would have his last season with over 100 innings. With his body apparently not up to the strain of being a starter, Cox was shifted to the bullpen after being released by the Phillies. The Pirates picked him up in the middle of the 1992 season, and he pitched well out of the ‘pen, especially in the NLCS (yes, the Pirates used to go the post-season quite a lot).

Cox would sign with another World Series winner in 1993, the Blue Jays. He had his best season as a reliever that year, going 7-6 with a 3.12 ERA over 83 2/3 innings. That success did not translate to the World Series, as he nearly blew the deciding game by giving up 2 runs in a third of an inning. He would last two more injury-prone seasons with the ‘Jays before hanging ‘em up in 1995.

Since his retirement, Cox has coached in independent ball and at a high school near his home in southern Illinois. 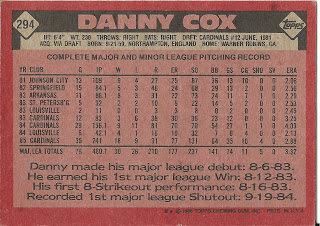 Rear guard: "Danny's" debut was against the Phillies . . . and he pitched 10 innings of shutout ball! Ah, the days of no pitch counts. Bruce Sutter blew it in the 11th, so no win for Cox.

I also find it odd that they chose to highlight a 8 strikeout performance. Usually, a pitcher is only noticed if he trikes out more than 10.
Posted by Jets Break Jaws at 7:53 PM