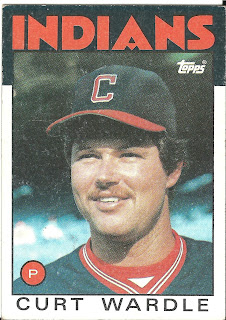 Card thoughts:  Another player with a “cheeky” smile. This would be Wardle’s first--and last--Topps card. Fleer issued a card of him in 1985.

The player: Yet another of the terrible starting pitchers the Indians trotted out in 1985, Wardle was originally drafted by the Minnesota Twins (after being drafted by three other teams). Mostly a reliever in the minors, he caught their attention in 1984 with a 0.69 ERA and 17 saves at AA Orlando.

Wardle started the season represented on this card in the ‘pen for the Twins, but struggled mightily with a 5.51 ERA. In what turned out to be a really bad trade for the Indians, they traded future hall of fame pitcher Bert Blyleven to the Twins for Wardle, Jay Bell (who found success after being sent to the Pirates), Jim Weaver (never pitched in the majors for the Tribe), and Rich Yett (bad middle reliever). For some inexplicable reason, the Indians tried to make Wardle a starter for the rest of the season. The result was terrible, as his ERA was a stratospheric 6.68, and only a third of his starts were quality starts. Wardle was even AWOL for a time when, after a two-day player strike, he couldn’t be found.

Wardle’s last major league appearance came this season at age 24, when he pitched to one batter on the second to last day of the season (Kent Hrbek), who lined out. He hung around a few years in the minors with the Indians and A’s organizations, before exiting pro baseball at age 26. 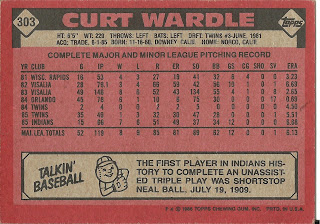 Rear guard: The Indians were called the "Naps" in 1909 when Ball completed his unassisted triple play. It was against the Red Sox, and was the "standard" unassisted triple play behind second (caught a line drive as the runners were moving, stepped on second, and tagged the man advancing from first). The play was behind Cy Young, and was done so quickly, no one on the field or in the stands really knew what was happening. Young apparently asked Ball why he was leaving the field. The glove that made the play is now in the hall of fame.

Here's a "pin" of Neal Ball that was inserted into American Tobacco pouches in 1910.
Posted by Jets Break Jaws at 10:04 PM