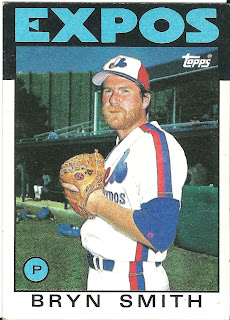 Card thoughts: Return of the glowing Expo! “Bryn” almost rhymes with “grim” which is how he looked on most of his cards. Another word about the unusual first name: It is an acronym of his grandfather’s first and middle names.

The player: Smith was a .500 pitcher who had trouble staying healthy throughout an entire season. The season that Smith had just completed (1985) when this card was issued was by far his best.

Smith was originally drafted by the Orioles, but was advanced slowly in the minors, despite having three standout seasons. He was sent, along with Rudy May and Randy Miller to the Expos in 1977 for Joe Kerrigan, Gary Roenicke, and Don Stanhouse.

With the Expos, the pattern repeated, with Bryn continuing to have great success in the minors, without getting much of a chance in the majors. Perhaps this is because he his out pitch was the little used palm ball, and his fastball was just average.

Finally, after 7 years, Smith got his chance in 1982. In that season and the following one, he was mainly a middle reliever. Smith finally got a chance as a full time starter in 1984, and although the win loss record (12-13) doesn’t reflect it, as he had a low 3.32 ERA.

The next several seasons Smith pitched in Montreal were very consistent. He generally averaged about 20 decisions a year, and would win 10-12 games, with a near equivalent number of losses.

But Bryn had some issues with playing in Montreal, especially with the lack of Doritos which he would have to cross over the New York to buy (couldn’t he have just bought a case on a road trip?). Whether it was the poor Frito Lay (brand) variety available in Montreal, the wood fire roasted bagels, or the poutine, he became a free agent and signed with the Cardinals. He was injured a lot of 1990 (he went a standard 9-8), but had his last good season in 1991 when he managed to stay healthy much of the year. His 12-9 record and 3.85 ERA were the best numbers he had put up since 1988. But in 1992 he barely made it on the field, and was snapped up for some reason by the Rockies in the expansion draft.

One thing you don’t want to add to a Rockies staff is a soft tossing righty, and despite getting the first win in Rockies history (an 11-4 victory over his former team, the Expos), he was released in June with an 8.49 ERA and a 2-4 record. 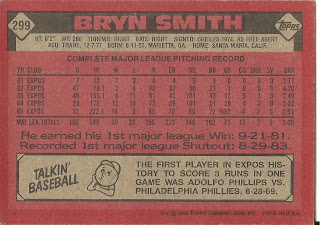 Rear guard: Smith's first major league shutout was a 6-hitter against the Giants. Despite it being 4-7 after this win, he had a 2.47 ERA. In the game, he walked none and struck out seven.

Adolfo Phillips' best years were behind him (as the centerfielder for the Cubs) before he came to the Expos in 1969 in exchange for light hitting first baseman Paul Popovich. Phillips scored only 270 runs in an eight year career, despite his great speed. Here's his 1970 card (number 666!).