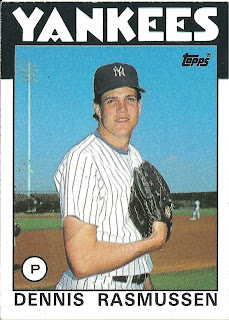 Card thoughts: Rasmussen looks like he’s wooing some baseball Betty in the stands. He’s got his glove over heart and a yearning, puppy dog expression on his face.

The player: Rasmussen followed the trajectory of many lefties. He showed a lot of promise in the minors, but high pitch counts and an inability to “finish off” batters, kept him in the minors longer than he would have done otherwise.

Rasmussen struggled with consistency the first few years of his major league career. He was involved in a war of words instigated by Bobby Cox after he brushed back Willie Upshaw after consecutive home runs by Jorge Bell and Jesse Barfield. Cox repeatedly used sexist terminology when describing Rasmussen’s actions, referring to him as “she.”

I found a mini card of Dennis Rasmussen from 1987, which means that he was considered a star pitcher that season. 1986 was certainly Rasmussen’s career year. He won 18 games (4th in the league) and had a .750 winning percentage. But Rasmussen was more of a beneficiary of good run support than doing anything differently than in the past.

The Yankees must have believed that year was a fluke as well, and they soon traded him to the Reds, after threatening to send him to the minors after a slow start. He improved considerably with the Reds, going 4-1 down the stretch.
But once again, Rasmussen struggled early in the season, and the Reds lost patience almost as fast as the Yankees, dealing him to the Padres just before he was supposed to make a start against them on June 8th. As was now a pattern, Rasmussen’s year revived after the trade, and he went 14-4 with a 2.55 ERA with the Padres, finishing the year a combined 16-10.

But in 1989, Rasmussen really started struggling with his control, and he was never more than an average pitcher afterwards. He walked (72) almost as many as he struck out (87) that season; even worse, the following year he gave up a league leading 28 home runs, despite pitching the majority of his games in the old National League West, where only Atlanta could be considered a hitter’s park.

After his playing days were done, Rasmussen coached for a time in the minors. 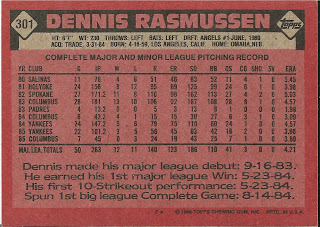 Rear guard: Rasmussen's first major league win was also his first 10-strikeout performance.  He went 8 innings and didn't give up a run (and only 2 hits). Still, he was not allowed to complete the shutout (unusual in those days).
Posted by Jets Break Jaws at 9:06 PM