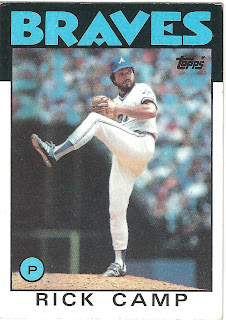 Card thoughts:  Rick Camp would be a Brave his entire career, and would slowly add facial hair as the years progressed. This would be his last card.

The player: Camp featured a heavy sinking fastball and an exceptional slider, which made him an effective reliever. But a lack of a good third pitch made him a mediocre starter. But Camp is most famous for a particular game, known by Braves fans as the "Rick Camp Game".

A Georgia native, Camp must have been thrilled to have been drafted by the Braves in the 7th round. He progressed quickly in the minors, jumping all the way from Rookie ball to AA in just one year. Although a starter in the minors, Camp was used mostly as a reliever at first when got to the majors.

Despite being only an average reliever in 1977 and 1978, it surprising that Camp was banished to the minors for the entire 1979 season. He could have been recalled later in the year, but an arm injury shut his season down early. The injury may actually have helped Camp's sinker, and he came back better than ever in 1980 and 1981, completely shutting down the opposition in the late innings and sporting ERAs well under 2.  This was good enough to be recognized as one of the top 10 pitchers in the league, if one uses WAR as a metric.

It looked like Camp had a bright future as a closer. But there were still many managers in the early 80s who believed that a relief pitcher was just a starter in waiting. If a pitcher “proved” his success as a closer, why waste him in that position when he could be starting? Manager Joe Torre was of that school, and Camp was converted to a starter for the 1982 season. However, Camp’s game plan of letting hitters pound his sinker into the ground was not as effective when he was seeing the same guys several times in a game. His ERA ballooned over 2 full runs and he went 11-13 as a part time starter and reliever.  Only half of his starts were quality starts and he averaged just over 6 innings a start, poor for that time. Although he pitched a bit better in 1983 and 1984, the Braves still couldn’t decide whether Camp was a reliever or a starter.

By the time this card was issued, Camp once again became a full time reliever, although relief legend Bruce Sutter had now usurped his role as closer. But it wasn’t his pitching that was memorable that year. Rather, it was his role in extending one of the longest games (time-wise) in major league history. It was the 18th inning of a game between the Mets and the Braves, and the Braves had run out of position players. The Braves were down by a run that scored after Camp made an error in the top of the inning. There was no one on and Camp was down 0-2. As he had hit below .100 in his career with no homers (although he did hit .231 in 1985), there was little chance the Braves were going to win this one. Of course, on the next pitch, Camp cranked out a home run. This only tied the game and, after giving up another 5 runs to the Mets in the top of the inning, Camp struck out with the tying runs on base in the bottom of the 19th to lose the game.

Camp retired at the relatively young age of 32. In retirement, Camp became a health care lobbyist. In a completely morally bankrupt act, he conspired with several others to siphon $2 million away from a Community Mental Health center. Camp was sentenced to three years in jail in 2005 for his part in the crime. No doubt some of the poor people he was siphoning funds away from would have spent a lot longer in jail for stealing a hell of a lot less. 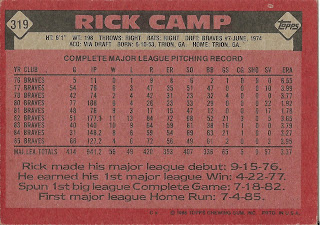 Rear guard: Aha! Obliquely, Topps references the "Rick Camp Game". Technically he hit the home run on July 5th, as it was about 3:00 AM. Little known fact: The team let off the post-game fireworks an hour later, freaking out the entire, sleeping neighborhood.
Posted by Jets Break Jaws at 10:03 PM