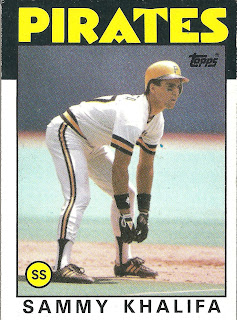 Card thoughts: This is perfect shot of Khalifa leading off second at old Three Rivers Stadium. I don’t why Topps chose to shoot in these cookie cutter east coast stadia, but not at Fenway or Wrigley. This is his rookie card.

The player: Khalifa was one of the rare Muslims to play baseball. Despite being born in California, he learned to play baseball in Egypt and Libya as a child where his father, a petroleum engineer, worked as a consultant.

But it was as a star baseball player in Arizona that Khalifa attracted the scouts. He signed with the Pirates, who were entering a bad stretch by the 80s. Despite mediocre offensive numbers in the minors, Khalifa was a gifted shortstop in the field. He was promoted in June to start at short after veterans Tim Foli and #48 Bill Almon failed at the job. Despite hitting only .238, the Pirates were high on Khalifa.

However, the team was in transition. Manager Chuck Tanner was let go, new manager Jim Leyland was installed, and the team was for sale. A whole new crop of rookies, much more talented than the previous class, was arriving. Khalifa was platooned with Rafael Belliard, who turned out to be a much better player. Various members of the Pirates coaching staff felt Khalifa held more promise, but he didn’t have the mental drive to succeed.

Sent to the minors for much of the 1987 season, he found himself competing against future star Jay Bell for playing time. The final straw came when he missed the team bus by five minutes. Instead of catching up with the team, he flew home to Tuscon and was suspended. Khalifa was encouraged by his father to persevere and give baseball another shot. Unfortunately, in January of that off-season, his father was murdered.

After being in a car accident, his father had regained his devout faith in Islam and became an imam, with several books to his credit, mostly trying to reconcile technology with his faith. Khalifa’s father was especially interested in numerology.
His perceived apostasy brought him the unwanted attention of several terrorist groups. And for years it was thought they had killed him. But just recently, a man who had fled to Canada was convicted in the killing. This man had no known terrorist connections.

At any rate, the murder so traumatized Khalifa, he never played baseball again. He currently drives a cab. 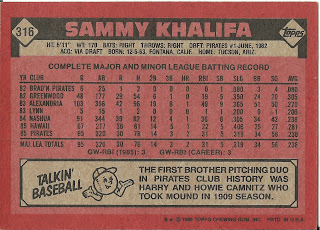 Rear guard: I'm beginning to think that Topps uncovered a lot of these extremely trival "brother" facts when they were researching the Big League Brothers subset in the 70s.

Howie Camnitz was a great pitcher for the Pirates, especially in 1909 when he went 25-6 with a 1.62 ERA. He had two other seasons where he won over 20, but he tailed off quickly when he turned 30, winning only 133 games in his career. His brother Harry pitched only one game in 1909, and two more in 1911 to finish out his major lreague career. However, he did win 27 games for the McKeesport Tubers in Class C Ohio-Pennsylvania League in the former season.