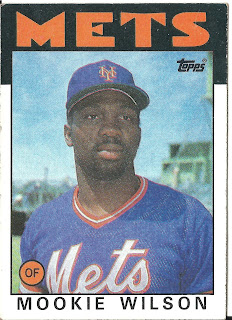 Card thoughts: Yet another spring training head shot (that is four in a row). Wilson is looking quite noble in this shot.

The player:   Mookie was one of the few star players on the terrible Mets teams of the early 80s (the other was the surly Dave Kingman). As such, Wilson became a fan favorite. However, his shortcomings as a player (too many strikeouts and not enough walks for a speedy leadoff man) caused him to be relegated to platoon duty once the Mets got some better players. A light-hearted look at Wilson is shown here.

Wilson, a speedy switch hitter, was drafted by the Mets in 1977. In the minors, he played a brilliant centerfield while leading the league in triples at Jackson in 1978, and steals and triples at Tidewater in 1980. While at Jackson, Wilson got married on the field and invited everyone at the game to have cake afterwards.

Once called up to Mets in 1980, Wilson became the starting centerfielder, pushing veteran Mike Jorgensen to the bench. On an offensively challenged team, he scored at least 90 runs in both 1982 and 1983 while stealing over 50 bases both years.  On the other hand, he walked only 18 times (and struck out 103) in a league leading 638 at bats in the latter year.

Despite having his best offensive season as a regular in 1984 (a career high 48 extra base hits, 10 home runs, 10 triples, 46 steals), the Mets were still not happy with his strikeouts. Although he switch hit--and hit equally well batting lefty or righty--starting in 1985, Wilson was platooned with #53 Lenny Dykstra. Limiting his playing time to about 110 games a year helped him, as he started hitting for a higher average (he hit over .290 twice from 1985-1989). One of Wilson’s most famous at bats came in Game 6 in the 1986 World Series. He was at the plate when Bob Stanley uncorked a wild pitch to let the tying run score. And here he is, slashing a hard grounder down the first base line, the ball that Buckner eventually booted allowing the winning run to score. At the height of the Mets popularity following that win, Wilson made an appearance on Sesame Street (see him at the at the 10 minute mark).

The magic was gone by 1989, and Wilson was hitting in the low .200s when he asked to be traded.  The Mets obliged by sending him to the Blue Jays for a pocket full of sunflower seeds (actually Jeff Musselman and a minor leaguer).  He spent the rest of the season as a fourth outfielder, hitting .298. The following year, the struggling Lloyd Moseby left as a free agent, and Wilson enjoyed his last season as a regular. Showing he hadn’t changed much since 1984, he walked only 30 or so times while striking out over 100.

In retirement, Wilson has driven a truck, and coached with the Mets in 1996-2002 and 2011. In between, he managed in the Mets minor league system. His nephew, Preston Wilson, had a pretty decent major league career for a while but, like Mookie, his propensity to strike out limited his utility (although he had a lot more homers than Mookie). Two of Wilson’s brothers John (averaged 30 steals a year in the minors) and Phil (27 steals) played pro ball as well, but only in the minors. 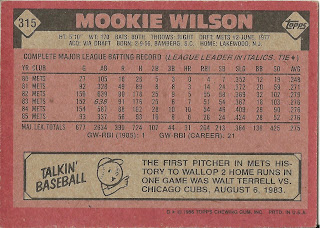 Rear guard: Walt Terrell hit 10 career home runs, but he only had a .193 total slugging percentage. In 1983, his rookie year, he would have his best year as a hitter, belting 3 home runs, driving in 8, and hitting a respectable (for a pitcher) .182.  Not only did he hit 2 dingers in one game, but he drove in all four Mets runs with those homers. The pitcher he victimized was Hall of Famer Fregie Jenkins.
Posted by Jets Break Jaws at 10:36 PM