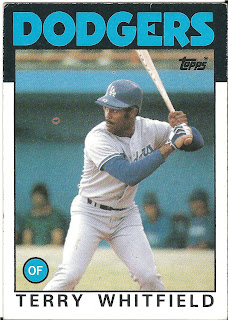 Card thoughts: This is Whitfield’s last card. And he's wearing the old style batting helmet without the earflaps over a regular cap. (I believe there are a bunch of Braves behind him in the dugout).

The player: Terry Whitfield was a first round pick of the Yankees. While he showed good power in the minors, it didn’t really translate to the big club. After three years of miniscule opportunities to make the club, he was traded to the Giants in 1976 for Marty Perez (who played just one game for the Yankees).

The Giants of the late 70s were woeful and, despite his inability to hit the ball with any kind of authority, Whitfield was the starting left fielder for the next four years. He exhibited a great arm in left (top ten in assists (1979, 1980) and fielding percentage (1978, 1980), but a corner outfielder shouldn’t be third in sacrifice hits (1978).

As a run producer, Whitfield was a victim of lack of opportunities, as much as his lack of power. Despite batting in the middle of the order for most of these years, he drove in 36, 32, 44, and 26 runs.  However, Whitfield did hit over .280 each year.

In something you don’t see much of today Whitfield, despite being an established major league starter, left the Giants early in spring training in 1981 to play for Seibu Lions in Japan. Back then, Japan often offered more money for marginal starting players than the majors did (especially the cash poor Giants). With Seibu, Whitfield was a star, bashing well over 20 homers a year and becoming a big time RBI man in the three years he played there.

Wanting to be closer to his family (not sure if we’re talking immediate or extended here), Whitfield came back to the states and signed with the Dodgers. Offered a back-up position in the outfield, his Japanese power deserted him as he slugged just .356.  The next season he hit .260 and got into one playoff game as an “announced” pinch hitter, but was called back to the bench in favor of #87 Candy Maldonado after a pitching change, having never got to bat.

After 11 games in 1986, Whitfield retired. He coached some high school baseball and invented a ball tossing machine dubbed the Terry Toss that can be found at various indoor baseball facilities and at the Giants’ home stadium, AT&T Park. 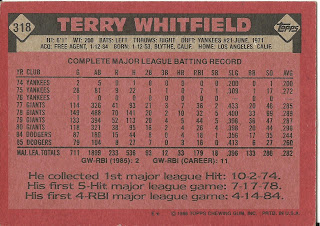 Rear guard: Since I crabbed about Whitfield's poor RBI totals, it is only fitting that I celebrate his first 4-RBI game which came late in his career. He hit a three-run home run and RBI double off of Giants starter Mike Krukow to account for those four RBIs.
Posted by Jets Break Jaws at 11:13 PM

But this was not the end for Whitfield.

He would continue on for a few more years in A+ ball, playing alonside Rudy Law, Julio Cruz, Andy Rincon, Dwayne Murphy, etc