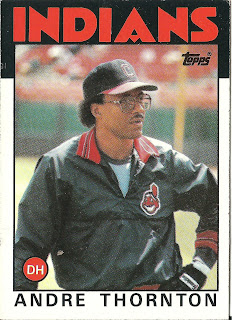 Card thoughts: With that jeri-curl and oversized glasses, Thornton looks like an old school sucka MC. I do not believe Thornton is wearing an Indians jersey under his windbreaker. The undershirt is light blue. And if you want to portray baseball players as unathletic, a good way to do it is to shoot them wearing a shapeless, baggy jacket in an empty stadium. Also, early Topps cards misnamed Thornton as "Andy."

The player: Andre "Thunder" Thornton is a perfect example of the "Moneyball" type of player who hit lots of home runs and walked a lot, who was undervalued in his time. He was also one of many great young players the Cubs had in 1970s that they traded away before their prime. But the Cubs weren't the only team who didn't see Thornton's talent. He went through two minor league organizations before his debut with the Cubs. After a fine 1975 season where he hit 18 home runs and slugged .516 (all while walking 88 times and only striking out 63), he slumped the next year and was traded to the Expos for a bag of beans (actually, washed Larry Bittner and Steve Renko). He continued hitting poorly with the Expos and was traded to the Indians for mediocre, soon to retire baseball pitcher Jackie Brown. Thornton then went on to have several great years with the Indians, interrupted only by a severe knee injury in 1980 which effectively ended his career as a regular first baseman. He hit 33 home runs and driving in 105 in 1978, and had a career year in 1982, hitting 32 home runs while driving in 116. He was an all-star in 1982 and 1984.

Personal tragedy struck Thornton in 1977 when his wife and daughter were killed in a car accident that he and his son were injured in. He used the accident as a life lesson and an affirmation of his Christian faith in the book Triumph Born of Tragedy. Thornton today is a management consultant an all-around gadabout in the Cleveland community, sitting on the boards of two colleges and the local zoo. He also is a pitchman for TotalGym. 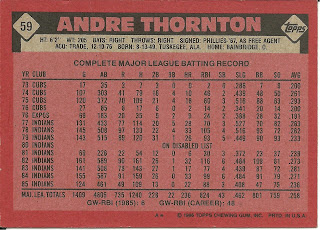 Rear guard: Topps had an inconsistent way of indicating a player didn't play in the majors. Sometimes they indicated the player "Did Not Play," occasionally the year would be erased, and in this case they actually said why Thornton didn't play the 1980 season.
Posted by Jets Break Jaws at 7:15 PM