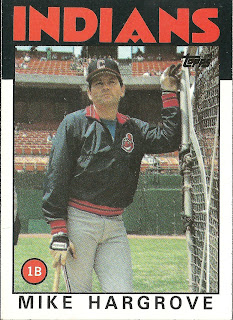 Card thoughts: This was Hargrove's last Topps card as a player. It must have been taken at the same batting practice session as the #59 Andre Thornton card. I'm guessing this was at the Angels' stadium. I remember this card vividly for some reason--probably because I had lots of doubles.

The player:  Nicknamed the human rain delay for his fussiness in the batter's box (see it here), Hargrove was the AL Rookie of the Year in 1974 and an all star the following season. With the Rangers, Hargrove was a good RBI man, with a little bit of power. But he was not the prototypical first baseman. For one thing, his biggest asset was his patience at the plate. He walked over 100 times four different seasons and led the league in 1976 and 1978. The Rangers, needing salary relief, traded him to the Padres in 1979. He said the league change was good, as he would "have come in with a crowbar, a stick of dynamite, and a shotgun and eaten first base" if he had to try to beat his former team. No word if that happened when he was traded within two and half months to the American League Indians after hitting a woeful .192 with the Padres.

Despite his loyalty to Texas, Hargrove is probably best known as an Indian. He hit over .300 twice with the Tribe, and continued to get on base via the walk at quite a clip. He even led the league in on-base percentage with a .424 average in 1981. Eventually, Hargrove's walking ability couldn't make up for the lack of run production that is usually associated with the power position of first base. He made way as a starting first baseman for youngster Pat Tabler the year shown on this card, leading to his retirement.

Hargrove became even more of a legend in Cleveland after retirement as he guided the Indians 5 straight division crowns and 2 pennants from 1995-1999. He left the  team for the Orioles after the final year of that run, where he managed the team to 4 fourth place finishes. He went on to Seattle in 2005, where he had another two 4th place finishes, before quitting mid season in 2007, despite being in the middle of a eight game winning streak. He stated he had lost the passion for the game. Hargrove currently is a special assistant with the Indians. 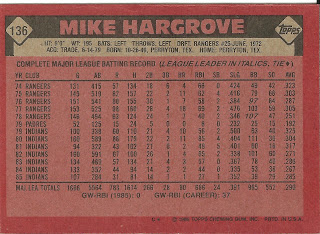 Rear guard: Not often do you see a player play over 100 games almost every season in his career (the 94 doesn't count in 1981 as that season was shortened by a strike.)
Posted by Jets Break Jaws at 8:10 PM