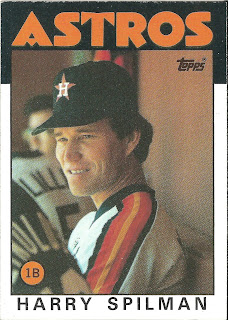 Card thoughts: Apt picture of Spilman where he spent most of his time, on the bench (behind Spilman is Bob Lillis, who managed the Astros early in the 1985 season).

The player: Spilman lasted as long as he did because of his ability to be a left-handed pinch hitter.

Early glory came to to Spilman when he won the MVP in the Eastern League in 1977 (he led the league in runs, hits, doubles, on base percentage, and OPS). But when Spilman finally came to the majors for good in 1979, he was used as a pinch hitter about half the time, the other half as a late inning defensive replacement at first base or catcher.

In his rookie year (in what would become a pattern), he played in 43 games and came to the plate just 65 times. He hit .227 as a pinch hitter, but only .217 overall. Spilman would have his busiest year in 1980, when he came to the plate 114 times (41 at bats as a pinch hitter). In the pinch, he swatted two home runs, drove in 6, and hit .292.  Spilman even started several games in a row at first at the end of April into early May.

That was pretty much the end of Spilman’s semi-regular play in the field. He did not have over 100 plate appearances in any of the next several years.  Spilman ended up on the Astros after being traded for another reserve who rarely started, Rafael Landestoy. His career in Houston was marked by some good years (above average hitting in 1982 and 1984), and years when you wonder how he didn’t get released (a .136 average over 44 games in 1985).

After a short stint with the Tigers, Spilman had a bit of a late career renaissance with the Giants in 1986 and 1987. He hit .424 as a pinch hitter the former year, and was used 61 times in the role the latter year (but with less success). Spilman finished out his career in 1988 (with the Giants and Astros) and 1989 (with the Astros). 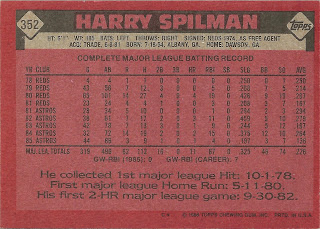