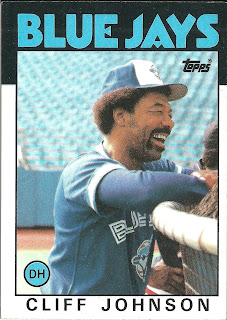 Card thoughts: There seems to be a lot of pictures of Blue Jays guffawing around the batting cage in this set. Was #168 Jeff Burroughs making the joke? Johnson wouldn't be laughing around the cage in '86 when he and #45 Damaso Garcia got in a fight when Johnson was taking up too much time in the cage.

The player: Johnson came up to the majors in 1972 as a catcher, but he was a terrible receiver, so he was shifted to first where he was below average as well. The then recent designated hitter rule was perfect for Johnson, and once he came over to the AL in 1977, that’s where he spent the majority of his time.

The Yankees, gearing for the stretch run in 1977, wanted a thumper off the bench (and someone who other than Jim Wynn who could platoon with Carlos May at DH), and got Johnson at midseason for a passel of youngsters, including previous blog subjects #283 Mike Fischlin and #101 Dave Bergman. Jacking 12 home runs in the final half of the season (including three against the Blue Jays on July 1), made him a hero in the Bronx. He continued to hit well in the ALCS, starring in Game 2 (home run, double) and hitting .400 overall. But in the World Series that year, teams were playing without the designated hitter, which put Johnson on the bench. He only pinch hit once and did not get a hit.

Despite another World Series winning season in 1978, Johnson became disgruntled. Whether he was upset at his .184 average, his repeated defensive lapses as the third string catcher, or the general cliquishness and in-fighting that characterized the 1970s Yankees teams, he wanted off the team.

Johnson got his wish soon after. Still unhappy, he brawled with Goose Gossage in 1979, injuring him (account of the brawl here), and he was soon shipped to the Indians for journeyman reliever Don Hood. He hit much better for the Indians (24 home runs, 89 RBIs in 414 at bats over parts of two seasons), and the Cubs inexplicably coveted him during their lost 1980 season. So they sent one of their top prospects (Karl Pagel) to the Indians to get a guy who couldn’t field to back up Bill Buckner at first.

A .235 average (but, with 10 homers and a better than average OPS), convinced the Cubs that Johnson wouldn’t be displacing Buckner at first anytime soon and he was sent to the A’s for recent first round draft pick Michael King (who never made the majors). After a couple of years as a backup, Johnson was traded to the Blue Jays, a team he always tormented while with the Yankees.

He platooned for three years at DH with Jorge Orta and had a bit of a late career renaissance. In 1983, he had his best season since the mid-70s, hitting 22 homers, 76 RBI and a .265 average. The Jays liked him so much that when he left after the 1984 season as a free agent (to the Rangers), they brought him back for the stretch run in 1985. Johnson played all 7 ALCS games against the Royals, and hit .368.

Despite a decent 1986 season at age 38 (15-55-.250), Johnson retired after the Blue Jays bought out the final year of his contract.  At the time of his retirement, he held the record for most pinch homers. 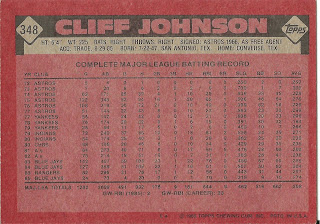 Rear guard: I gotta get up at dawn to shovel mulch into the garage tomorrow, so nothing tonight.
Posted by Jets Break Jaws at 9:43 PM