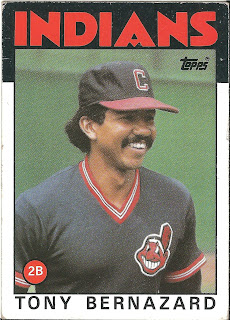 Card thoughts: I really don't think Bernazard has this bad of an overbite in real life.

The player: Bernazard was a colorful figure as a player (he only ate chicken during hot streaks), and was such a hot head as a Mets VP during the 2009 season that he was fired. In between, Bernazard had a decent career, mostly as a second baseman.

Signed as a raw 17 year old out of Puerto Rico by the Expos, Bernazard spent 6 years in the minors before getting his chance to come up to the big club when Chris Speier was injured in July, 1979. In limited play, he hit .300 with a .925 OPS.  Bernazard was slotted in a utility role in 1980, with the Expos preferring the blazing speed of Rodney Scott at second, and the experience of Speier at short. He struggled in this role, hitting just over .220.

A change in scenery was in order, and he was sent to the White Sox for struggling starter Rick Wortham. With the smaller ballparks in the American League, Bernazard started to thrive. Generally batting second or leadoff, Bernazard scored 90 runs in 1982 and was on base at a .337 clip.

But with the Sox charging toward the division title in ’83, Tony LaRussa decided he needed more speed at the top of the lineup to make up for the departure of Ron LeFlore. So Bernazard was sent to the Mariners for #14 Julio Cruz in a starting second baseman swap. Interestingly, he stole 21 bases after the trade, almost as many as Cruz.

Despite hitting well in his brief time with the Mariners, it soon became clear he was an abject fielder (19 errors at second in 1983, and a below average defensive rating while with the Mariners). So he was swapped to the Indians for yet another starting second baseman, #146 JackPerconte, and disappointing slugger Gorman Thomas. At first, it looked like a terrible trade as Bernazard endured a record breaking 0 for 44 slump and hit just .225, while Perconte hit .294 for the Mariners.

By the time this card was issued, Bernazard was beginning to hit again, eventually earning his a Topps all star card in 1987, when he hit career highs in just about every offensive category, including hits (169) home runs (17), runs batted in (73), and batting average (.301).

A disappointing 1987 season followed, where Bernazard got a little homer happy, and his average dropped considerably. He was swapped in a deadline deal to the A’s for marginal players Darrel Akerfelds and Brian Dorsett. He took over for the injured #29 Tony Phillips at second for the rest of the season and hit .266 with an good OPS for a second baseman.

After the season, Bernazard decided to try his luck in Japan, where he played three years with the Hawks. His best Japanese season was in 1989 when he hit 34 homers and drove in 93 while slugging .543. He also had a 28 game hitting streak in 1988. Coming back to the states in 1991, Bernazard signed a contract with the Tigers. He got into 6 early season games before being released in May.

Bernazard has worked a variety of “white collar” baseball jobs since retirement, including as a player relations advisor to the MLBPA. But was in his role as VP of Player Development with the Mets that Bernazard got into real trouble. Although it’s hard to believe these were the first instances of his anger issues (and apparently, it wasn’t—see this account of the “bus-driver incident.”), during the 2009 season Bernazard:

Even after his dismissal, the Mets had to repair some damage to the team, most notably the fact that Bernazard (who was not the hitting coach, remember), got obsessed with making the team hit the ball the other way, so much so that they began to hit for less power.

After being fired, Bernazard worked for Scott Boras in a role similar to the one held with the MLBPA. 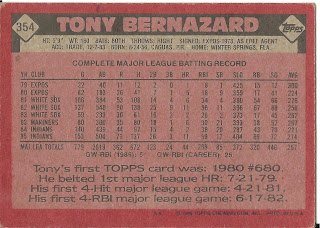 Rear guard: Bernazard's first Topps card was an Expos "future stars" card that he shared with John Tamargo and Randy Miller. Hard believe that Miller was believed to be a star: He had not pitched in the majors since 1978, probably since he gave up 11 runs in his career in just 7 innings. He did go 10-8 at Denver with a 4.48 ERA in 1979, hardly a star making turn. Bob Pate, who hit .343 at Denver that year, would have been a better choice.