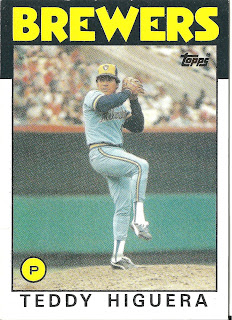 Card thoughts: I think Teddy is pitching in old Memorial Stadium in Baltimore, but I can’t be sure.

The player: How was a talent like Higeura’s passed over for so many years? The guy consistently had ERAs around 3 in the notoriously hitter happy Mexican League. Yet, he only crossed the border to the Brewers AA club in El Paso at age 26.

Higuera had a meteoric rise not unlike Dwight Gooden, but he crashed a lot sooner. Somehow, despite a 15-8 record, he came in second to #254 Ozzie Guillen in the Rookie of the Year voting. He followed that up with a 20-10 sophmore campaign, where he led the league in WAR (9.4), and placed in the top ten in ERA (2.79), Win-Loss percentage (.645), strikeouts (207), complete games (14), and shutouts (4). Despite these excellent numbers, Higuera finished second to Roger Clemens in the Cy Young voting. He did make the all-star team, however, and was struck out by fellow Mexican Fernando Valenzuela in the game.

Higuera continued his excellent work in both 1987 (18-10) and 1988 (16-9, with a league leading 0.999 WHIP). But injuries to his back and ankle limited him in 1989 to 22 starts. Even more career threatening was a rotator cuff injury that sidelined him for the entire 1992 season. When he came back, he struggled with a 7.20 ERA in 8 starts. Higuera was even more terrible in 1994, where in 17 starts, his ERA once again ballooned above 7. That was it for Higuera, who retired as the Brewers career leader in strikeouts (since surpassed by another early career burnout, Ben Sheets).

Higuera coached the Mexican National baseball team in several WBCs, and gained admission to the Salon De Fama (the Mexican version of the Hall of Fame) in 2011. 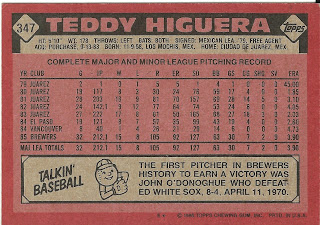 Rear guard: Topps continues it's tradition of breaking words in the most inopportune places (defeat-ed), despite the fact that the text is justified. I guess poor John O'Donoghue (card representing 1970, featured here) has too long of a name for Topps to handle.

It only took 4 games for the Brewers to win their first game (although shouldn't the Pilots' first win on April 8, 1969 be the first franchise win?). O'Donoghue was a terrible journreyman starter who at this point ion his career was a long relief guy. He pitched a scoreless seventh and eighth inning to get the win.

O'Donoghue was so bad for the Brewers, that he was traded to the Expos for Jesus Herrera, who never played a major league game for the Milwaukee team.
Posted by Jets Break Jaws at 9:29 PM