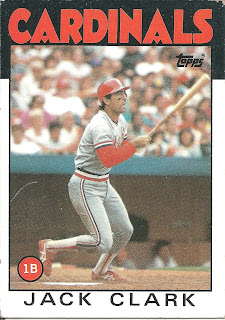 The player: I remember Jack Clark as the only legitimate power source on the Cardinals of the mid eighties. But he also had a reputation as a malcontent, and was an indifferent fielder in his younger days in right field, necessitating a move to first when he joined the Cardinals.

Jack Clark is a modern sabermetician’s dream.  He consistently put up an OPS above .800, as his ability to draw walks (6 times over 90), and hit home runs (over 20, 10 times; over 30, once) was a winning combination. Drafted as a pitcher (he started 2 games in Rookie League), Clark consistently hit over .300 and showed a knack for driving in runs in the four years he spent in the minors. At age 21, he replaced Bobby Murcer as the Giants right fielder, and had a .407 slugging percentage in his rookie year. Clark soon became one of the Giants star players, posting a .537 slugging percentage in 1978 (and making the all star team, as he also did in 1979).

Clark supplied the missing power bat that the Cardinals needed to get them to the World Series. In 1985, he hit 22 home runs and drove in 87 while slugging .502. Because of the lack of power hitters, Clark was frequently intentionally walked when runners were in scoring position (14). In the playoffs, he won the deciding Game 7 when he hit a two out, three run home run in the bottom of the ninth. He drove in another four runs in the World Series in a losing cause.

Clark lost most of the 1986 season to injury, after tearing a ligament in his thumb after sliding into third I n a game in July. But he came roaring back in 1987, in an MVP worthy campaign (93 runs, 35 home runs, 106 runs batted in, and a league leading 136 walks, .459 on base percentage, .597 slugging percentage, and a 1.055 OPS). Oh, and Clark started the all star game at first. Not to say there weren’t bumps along the way. Clark tied a record when he committed three errors in an inning against the Braves. He booted a grounder by Albert Hall, failed to catch a throw from Ozzie Smith on a #76 Dion James fielder’s choice, and then threw wildly past second to allow James to go third. Additionally, Clark was felled by a sprained ankle at the end of the season, which limited him to one pinch hitting appearance in the NLCS. Some Cardinal players felt that he should have made a better effort to play despite the injury.

Clark signed with the Yankees after the season, in a move that some felt was a thawing of the collusion the owners engaged in in the 1985 and 1986 off seasons. But despite putting up his usual stellar numbers (27 home runs, 93 runs batted in, 113 walks), he was unhappy in New York, which included a ligament tear in his leg, because of the “Win-now” mentality. So he was happy when he was sent to the Padres, where he filled the sole-power source role he held with the Cardinals. Clark drove in 94 runs in 1989, and the led the league in walks for the next two years, but he was aging fast.

The obvious role for an aging slugger was as a designated hitter in the American League. In 1991, Clark joined the Red Sox and he had a solid season exclusively at designated hitter (28-87-.249). After 80 more games in 1992, he retired.

In retirement, Clark has continued to be both irresponsible and jerky, without the luxury of home run production to cover it up. After years of overspending, he went bankrupt  in 1994, and tried many things to recover, including drag racing. He also was a hitting coach with the Dodgers around the turn of the century, where supposedly Albert Pujols’ trainer told him Phat Albert was full of juice. On the radio show he had been hosting for about a week, Clark repeated this unsubstantiated claim, and, aside from being canned, he’s now being sued for libel by Albert Pujols. 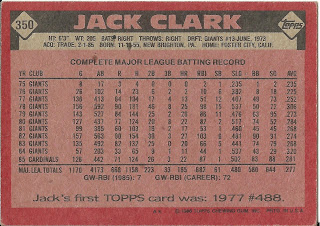 Rear guard: I recall seeing this rookie card at a flea market and salivating over it, but it was probably like $5, too much for my young wallet.

Only Danny Thomas on this rookie star card doesn't have a card in this set. Ruppert Jones was an all star when this card was issued, Lee Mazzilli was already becoming the most popular/most talented Met of the late 70s, and Danny Thomas aka the Sundown KId flamed out spectacularly, when he became very religious and refused to play from sundown Friday to sundown Saturday. He later hung himself in jail at age 29 after being charged with rape.

I hate him so.