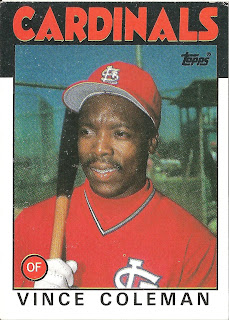 Card thoughts: On the verge of one of the most spectacular rookie seasons ever, I remember just being completely afraid, everytime Coleman was on base. You just knew he’d steal at least second (and probably third), and no one was going to catch him. Think: Billy Hamilton

The player:  What is it about champion base stealers? Like Rickey Henderson, Coleman’s arrogance eventually alienated many of his teammates. Unlike Rickey, he didn‘t have the all-around talent to back up his lofty pronouncements of his talent.

Coleman began setting base stealing records in college, and he continued while in the minors. Despite missing a month with a broken hand, Coleman stole an incredible 145 bases at Macon (South Atlantic League) in 113 games in 1983, which was the minor league record before Billy Hamilton broke it a year ago. He stole another 101 bases at Louisville, as he bounced up two and half levels in 1984.

Coleman came up with the Cardinals when Tito Landrum was injured early in 1985, and he immediately started stealing up a storm, ending up with a rookie record 110 steals (and the third highest total in major league history). Coleman was a perfect fit for spacious, astroturfed Busch Stadium, although, despite his great speed, he wasn't much of a left fielder.

However, there were some bumps on the way to his unanimous selection as Rookie of the Year. When he was compared  to Jackie Robinson, he claimed not to know who he was. And the speed masked the fact that Coleman was just an average hitter, who didn’t walk much for a guy with no power (his 115 strikeouts were sixth in the league).

Another pitfall that was not Coleman’s fault occurred when he was stretching in the outfield during the NLCS. While he was stretching, the automatic tarp unrolling machine started up, and rolled over his leg, incapacitating him for the World Series. Tito Landrum, Coleman’s replacement, hit .360 in the series, but they missed his speed.

Coleman would go on to lead the league in steals for all six seasons he was with the Cardinals, including having over 100 steals in each of his first three seasons. He finally made the all star team in both 1989 and 1990. A highlight of this period was Coleman’s 50 straight steals in 1990.

As one of the top leadoff men in baseball, Coleman was highly sought after when he declared free agency after the 1990 season. He eventually signed a four-year contract with the Mets. The Mets were in their most dysfunction phase in the early 90s, with former stars #250 Dwight Gooden and #80 Daryl Strawberry dealing with substance abuse issues and injuries. Unfortunately, the addition of Coleman added to this dysfunction (although he did replace Strawberry). A myriad of injuries kept Coleman from playing in more than 100 games in any of the years for played for the Mets. Even worse, leg injuries sapped his speed, which was his only plus tool. When Coleman was on the field, he caused a myriad of problems including:

--Ignoring coaches’ steal signals on the basepaths
--Fighting with coach Mike Cubbage (and thereby showing up manager Bud Harrelson) when he hit out of order in batting practice
--Claiming that the poor playing surface at Shea Stadium was keeping him out of the Hall of Fame (since he couldn’t steal)
--Recklessly swinging a golf club in the Mets clubhouse, injuring Dwight Gooden’s arm
--And most notoriously, hurling a firecracker into a crowd of autograph seekers at Dodger Stadium, injuring three people including a little girl.

Tiring of Coleman’s antics, the Mets sent him to the Royals in 1994 for way more than they should have gotten, slugger Kevin McReynolds. Although he was able to play in more games with the Royals, and stole 50 bases, Coleman was now viewed as damaged goods, a mercurial, arrogant player prone to injury. He did seem to clean up his act once he got to Kansas City, but he was on the move often in his last few years in baseball, going from the Royals, to the Mariners, to the Tigers, and to the Reds as little more than a backup outfielder. He ended his career at AAA Louisville in 1998 when he didn’t get called up by the Cardinals.

Despite his career as a regular basically being over at age 28, Coleman still ranks sixth all-time in stolen bases, and had a remarkable career steal rate of 80%. Since retirement, he has been a minor league base stealing instructor for the Cubs and other teams. 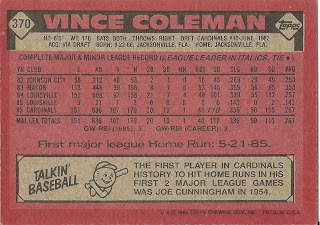 Rear guard: Coleman would only hit 28 career home runs, and his first was an inside-the-park home run off #24 Len Barker.

Everyone knows about Joe Cunningham right? Well, Joe seemed like a good prospect, but he never really panned out. He only hit 9 more home runs the rest of 1954, and only 64 over a 12-year career with the Cardinals, White Sox, and Senators. Here's his "collage" card from 1955.
Posted by Jets Break Jaws at 9:32 PM