The most read post 100-200? Wally Backman. He has also supplanted Steve Yeager as the most popular 1986 Topps blog player. 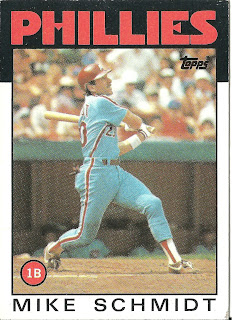 Card thoughts: The best third baseman of all time should not have to wear his pajamas to the plate. This is the only Schmidt Topps card to show him playing any position other than third.

The player: 548 home runs, including some of the longest in his generation; three MVP awards (including 2 straight); 12 all star appearances; 9 straight gold gloves (and 10 overall): Schmidt was the definition of the complete player. His only flaw was his propensity for strikeouts (9th all time) and inability to hit for average (.267 lifetime). He’s considered the greatest Phillie of all-time.

Schmidt began in the minors as a shortstop, but was named the Phillies starting third baseman in 1973. He probably wasn’t quite ready for the majors yet. He hit only .196 with 136 strikeouts in only 367 at bats. But he figured it out pretty quick the following season when he hit 36 home runs and slugged .548 to lead the league. He also led in strikeouts. The next three seasons he would lead in both home runs and strikeouts, with a high of 180 in 1975 which was a record at the time.

Schmidt’s prime years were between 1979 and 1987. He hit more than 30 home runs every single one of those years, even in 1981 when he had only 354 at bats. The explanation for Schmidt’s increased success is the reduction of his number of strikeouts. Highlights included breaking Chuck Klein’s team record for home runs (45 in 1979); winning the World Series MVP award in 1980; and winning the MVP award three different times, including twice in a row (1980 and 1981).

Schmidt did this all despite chronic knee problems, which were aggravated by the amount of games played on Astroturf (including his home field, Veterans Stadium). To help protect his knees, Schmidt was moved by the Phillies to first base for the season shown on this card. The experiment lasted only one season, and he was shifted back to third for the rest of his career.

Schmidt surprised many people for announcing his retirement after a slow start in 1989. He retired, effective immediately, on May 29 in a tearful farewell address at his locker before a game against the Padres. This is refreshing as compared to the Chipper Jones model of taking a victory lap around the league. For the record, Schmidt’s last game was the day before against the Giants. He went 0 for 3, but walked 2 times.

Schmidt retired with top 20 career totals in home runs (548); WAR for position players (108.3); sacrifice flies (108); assists as a third baseman (5,045); and range factor as a third baseman (3.14), among others. He has largely stayed out of the limelight since his retirement, although some people believe he and Joe Morgan, as members of the hall of fame selection committee, were largely responsible for the inability to elect deserving veterans into the hall of fame the past several years. 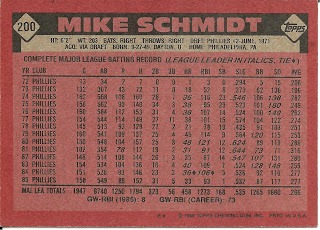 Rear guard: For Schmidt, 1985 was a typical year where he belted over 30 home runs, drove in over 90, and slugged above .500. One notable statistic is the 30+ doubles he hit. With all his power, SChmidt had only done that twice before.

This date in baseball history: Crosley Field, a beautiful old ballpark in Cincinnati, was begun to be demolished in 1972.
Posted by Jets Break Jaws at 10:22 PM