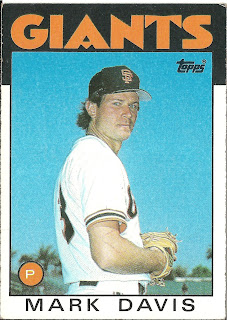 Card thoughts: Starting to see a lot of card shots that were obviously taken the same day. This one is very similar to #111 Roger Craig. I will also say that Davis' reptilian neck wrinkles are quite disturbing.

The player: Davis was a player whose star burned bright for an incredibly short time. As a starter, Davis was terrible. He was the first overall pick for the Phillies in the 1979 January draft (there were two drafts a year back then). He had promising stats in the lower minors, but once he reached AAA, his ERA climbed. He was still afforded a major league opportunity with the Phillies, but he couldn't stick. He finally got an opportunity when he was traded to the Giants with Mike Krukow for Al Holland and Joe Morgan. With the Giants, Davis got the opportunity to start regularly and was terrible, leading the league in earned runs given up in 1984, and winning only 5 games against 17 losses. Moved to the bullpen in 1985, he did managed 7 saves, but went 5-12.

The Giants, like the Phillies, finally tired of waiting for Davis' talent to pan out, and traded him to the Padres in a blockbuster deal, which also involved  Kevin Mitchell, Dave Dravecky, Craig Lefferts, Mark Grant, Chris Brown, and Keith Comstock. The trade worked out well for both teams--both Kevin Mitchell and Mark Davis became stars for their respective teams. Davis became the Padres closer and shone, posting 28 saves and a 2.08 ERA, despite having a 5-10 record. He also went to the all star game. The next year, he was even better, recording a league leading 44 saves and a 1.85 ERA. This was enough to win the 1989 Cy Young award, recording 89% of the vote. This may be one of the most forgettable and undeserving Cy Young winners in recent history. Mike Scott (20-10) or Greg Maddux (19-12), were certainly better overall pitchers than Davis. Scott was probably denied because of widespread suspicions he doctored the ball and Maddux played on a losing team.

Davis' Cy came at the right time. A free agent the next year, he signed a lucrative long term deal with the Royals, where he promptly bombed, with ERAs of 5.11, 4.43, and 7.18 in three seasons. He lost his closer job to Jeff Montgomery and was traded to the Braves mid season in 1992 for #47 Juan Berenguer. After 3 more middling seasons with the Phillies, Padres, and Brewers, his career was at an end. He only had 11 saves in his last 8 years after his 44 in 1989. But the Royals didn't harbor any ill will towards their free agent bust. Davis was the pitching coach for 2006-2010 for the Royals Arizona League team, and was promoted to minor league pitching coordinator for 2011 season. 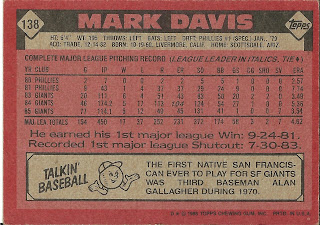 Rear guard: Davis had an easy first win. The Phillies scored 11 runs off of the Cardinals in the third inning. He gave up 4 runs on 8 hits in 7 innings.

Gallagher was an all-star rookie in 1970, according to Topps. This was despite only driving in 28 runs. Gallagher was a regular third baseman on the Giants through 1972, but never hit the ball with much authority (his career slugging percentage was a measly .337.) He ended his career in 1973 with the Angels.
Posted by Jets Break Jaws at 12:32 PM

Davis hosed KC so bad, he could coach for free for the next 20 years and he'd still come out ahead.