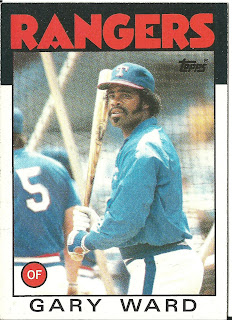 Card thoughts: Wow. What can you say about that facial hair? It looks like it was the result of an overzealous Wooly Willy player.

The player: Ward broke in with a bang with the Twins, hitting for the cycle in just his 14th major league game. He followed that up in 1981 by finishing 9th in the Rookie of the Year voting. But he really came into his own the following season, scoring 85 runs, hitting 28 home runs, and driving in 91. The next year, he led the league with the highest assist total for an outfielder since 1944 with 24. Ward also drove in another 88 runs and made the all-star team for the first time. He was traded after the season to Texas for pitchers John Butcher and Mike Smithson, a trade that worked out well for both teams. Ward continued his solid hitting, driving in at least 70 runs his first two seasons in a Rangers uniform, and making the all-star team again in the year represented by the card.

After injuries took a toll on his playing time in 1986, Ward left for the Yankees as a free agent the following, and squeezed one more productive year out of his aging body, hitting 16 home runs and driving in 78 while serving as one of many designated hitter/outfielders the Yankees had that season. But apparently, Ward was only a slump away from being exiled from the Bronx. He was released 8 games into the 1989 season, and picked up by the Tigers. He had two decent seasons as a part time player with Detroit before retiring in 1990.

Post career, Ward was a hitting coach for a time in the White Sox system, including for the parent club from 2001 to 2003. He took some time off to be a coach at New Mexico State University, and returned to the Sox organization for the 2009-2010 season. His son is former major league outfielder and pinch-hitter extraordinaire Daryle Ward. 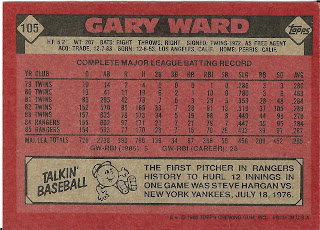 Rear guard: Hargan had already pitched 11 seasons and was 33 when he pitched those 12 innings. He gave up 2 runs (none earned), walked only 1 and struck out 10 in a complete game victory over reliever Sparky Lyle.
Posted by Jets Break Jaws at 4:20 PM