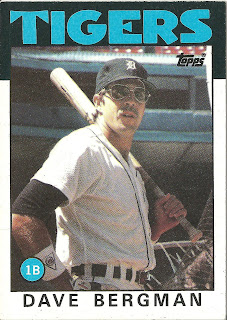 Card thoughts: This is a really odd angle on Dave Bergman. The shadows are all wrong, and it looks like he's wearing sunglasses. It's likely this shot was taken in the late afternoon before a night game.

The player: In the days of the platoon player (made possible by using less relief pitchers), Bergman was a valuable commodity, as a good fielder and competent left-handed hitter. The guy raked as a hitter in the minors, hitting under .300 only once before reaching the majors, despite the fact that his first manager said he was the worst player he'd ever seen. Once he got to the majors, his lack of power generally relegated him to the bench, where, like most players who are primarily pinch hitters and defensive replacements, he had his up years and down years. He played for the Yankees, Astros, and Giants before landing with the Tigers in 1984 where he would have his greatest success. He drove in 44 runs while hitting .273 in that World Series winning year, despite only coming to bat 271 times. Bergman was also known as having a good eye at the plate, rarely striking out more than walking. In 1989, with the departure of Darrell Evans, Bergman finally got a chance to start at first at age 35. He responded with a decent average, but poor power numbers. He retired in 1992 after a 17 year career. He currently runs an elite traveling baseball club, the Gross Pointe Redbirds, in an elite Detroit suburb. 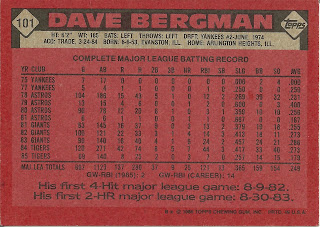 Rear guard: Dave Bergman came in as a defensive replacement in that game in 1982; he had no hits. Wrong again Topps! The two homers were against the Expos and he drove in five runs that day, as he had 4 hits on that day.
Posted by Jets Break Jaws at 5:08 PM