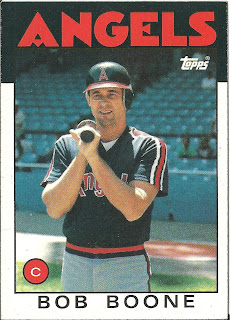 Card thoughts:  Bob Boone looks surprisingly youthful for a guy who has already caught over 1500 games. There were a lot of pictures taken in this blue stadium. I'm guessing it's Tiger Stadium due to the heavily shadowed lower deck.

The player: Bob Boone, like Yogi Berra and Johnny Bench before him, was one of those catchers who was insanely durable over a long period of time. Most starting catchers, if they're lucky, will catch about 100-120 games a year. Boone regularly caught more than 130 games a year. And he was no slouch at the plate either.  He was a four-time all-star who regularly hit over .270 in his prime. He also was a great fielding catcher, winning the gold glove 7 times, including 4 straight years from 1986 to 1989. He caught over 120 games when he was 41! His 2,225 games caught all time broke Gary Carter's record, and was subsequently broken by Carlton Fisk. Current catcher Ivan "Pudge" Rodriguez currently holds the record.

He is also part of a baseball family. His father Ray Boone played in the 40s and 50s, and sons Aaron and Bret had good careers of their own in the 90s. Bob managed a bit for the Royals and the Reds, but never had a club have a better than .500 record. 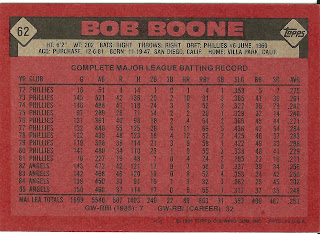 Rear guard: Boone only caught less than 100 games once during a full, non strike shortened season.
Posted by Jets Break Jaws at 10:27 PM