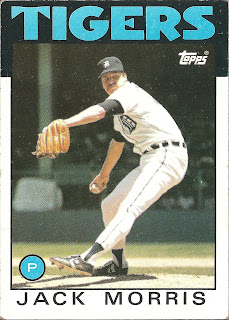 Card thoughts: Judging by his grip, Jack Morris is about to throw a split finger fastball. I really like these mid-afternoon shots early in the season at Tiger Stadium. The white uniforms just seem to glow. And Mr. Morris shares my birthday (but not birthdate)!

The player: Morris is certainly one of the consistently best Tiger pitchers in the last 50 years, and I think that you can make a very good case he should be in the hall of fame. Even though he didn’t win the magic number of games (300), there are many pitchers in the hall of fame that didn’t reach that plateau, and Morris was a big game, dominant pitcher when his teams needed him. The big drawback with Morris is that his career ERA (3.93) is pretty high for an “ace”. But he did pitch most of his games either at Tiger Stadium or the Metrodome, both offense happy stadiums.

Morris was almost immediately a star pitcher for the Tigers. After moving around between the bullpen and rotation in 1978, Morris made 27 starts for the Tigers in 1979 going 17-7. After a mediocre year in 1980, Morris had his first dominant season, leading the league with 14 wins the next strike-shortened season. However, Morris also led the league in walks with 78, which would continue to be Morris’ Achilles heel throughout his career.

Another mediocre season followed, but then Morris went on a dominant  5-year career, where he won over 20 twice (1983 and 1986) and nearly another time (1984). Morris also was in the top 10 in the Cy Young Award voting ever year but the one represented by this card. The secret of Morris’ mastery was learning to effectively throw the split-finger fastball, a pitch taught to him by #111 Roger Craig. This led to dramatic increase in strikeouts (jumping from 135 to 232 from 1982 to 1983) allowing him to negate his wildness somewhat.

The Twins were leery of Morris’ recent poor numbers, so they signed him to a one year contract. But Morris proved to be the boost they needed, as his veteran presence in the rotation propelled the Twins to the World Series. Or his part, Morris’ ERA dropped by more than 1 run, and he won 18 games (against 12 losses).

This performance allowed Morris to sign an incredibly lucrative contract with the Blue Jays, who were looking to take their talented team to the next level. Morris certainly helped them out, winning a league leading 21 games despite having an ERA over 4.

But Morris was now 38. Despite setting a record by starting on opening day for the 14th consecutive season, the 1993 season was a poor one for Morris. He only 7 games, and his ERA was a horrendous 6.19. Although the Blue Jays repeated their World Series win, Morris, once one of the biggest game pitchers, was left off the post season roster.

He tried his luck with the Indians, but despite his 10-6 record, his ERA was still extremely high at 5.60. After an aborted comeback attempt with the Reds, and a short stint pitching in the independent leagues (record for the St Paul Saints: 5-1, 2.69 ERA), Morris retired.

Morris was always at his best in the World Series (career ERA: 2.96) but not necessarily the ALCS (ERA 4.87). He won World Series rings with three different teams (Tigers, Twins, and Blue Jays). Among his more memorable World Series starts, he completed both his starts in 1984, giving up only two runs each times; he pitched a 10 inning shutout to defeat the Braves 1-0 in the deciding Game 7 in 1991; and, in a negative way, his 8.44 ERA in two 1992 starts (including 7 runs given up in Game 6). He won the World Series MVP in 1991.

Morris has received more Hall of Fame votes every year he’s been up for election, reaching over 66% last year (a player needs over 75% to make it in). If he makes it in, his ERA will be the highest for any pitcher in the Hall. Hall of Fame pitchers that Morris compares favorably to are Bob Gibson, Red Ruffing, and Amos Rusie. 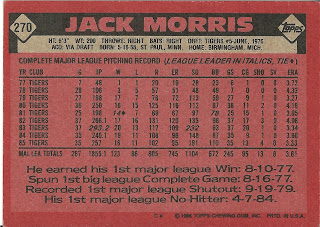 Rear guard: It was Morris' no hitter, early in the 1984 season, that more than any other event established him as one of the greatest pitchers of the 80s. The hapless victims were the White Sox. But although Morris was unhittable, he walked 6, including the bases loaded in the 4th inning. Here's the end of the game call by Ernie Harwell.
Posted by Jets Break Jaws at 9:14 PM